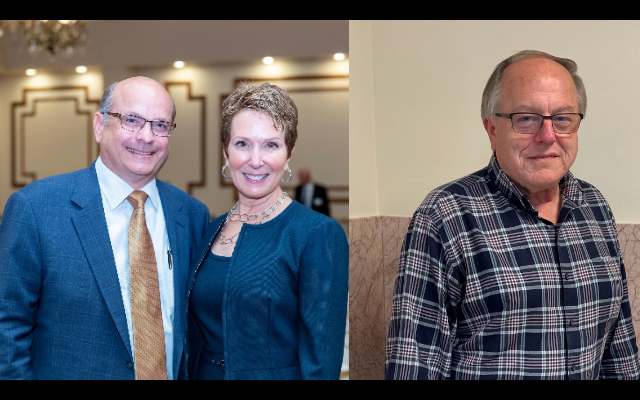 Project Acclaim will induct Ed and Gloria Dollinger and Michael Turk into its 2022 Hall of Pride during its 35th Jade Anniversary Banquet on Monday, November 14 from 6 to 8 p.m. at the Jacob Henry Mansion Estate, 15 S. Richards Street in Joliet. Social Hour is at 6 p.m. and the program begins at 7 p.m. Tickets are available online at bit.ly/2022HallOfPride for $35 which includes hors d’oeuvres and a cash bar. Tickets are also available by mailing a check payable to Project Acclaim to the attention of Sylvia Acosta Chavez, P.O. Box 3799, Joliet, 60434-3799. Kindly purchase tickets no later than Wednesday, November 9.

Project Acclaim is excited to bring this event back in person to honor these deserving individuals. “Founded in 1985 by Reverend Jim Allen, Project Acclaim (formerly Project Pride), was established to highlight the positive aspects of life in the Joliet area at a time when there seemed little to celebrate,” said President Jayne Bernhard. “Two years later, the Hall of Pride was created. In its 35 years, nearly 150 individuals and organizations whose long-term efforts have been dedicated to making the greater Joliet area a better place to live and raise our families have been inducted into the Hall of Pride. We cannot wait to honor Ed and Gloria Dollinger and Michael Turk for their contributions to our community.”

About the Honorees
Ed & Gloria Dollinger
Ed and Gloria Dollinger are outstanding philanthropists and community contributors for the Joliet/Will County area. They have committed themselves to improving the quality of life in Joliet and Will County.

Ed opened the first office of Edward Jones Investments in Joliet in 1986. Since then, he has mentored many others in his profession and has overseen the tremendous growth for that company in Joliet and Will County.

Ed’s community involvement is truly inspirational with Board involvements that include the University of St. Francis, the Diocese of Joliet Finance Council, and the Will County Center for Economic Development. He previously served as a Board Member for the Community Foundation of Will County, the St. Joseph Medical Center and Joliet Catholic Academy. He is also a member of the Rotary Club of Joliet.

Gloria Dollinger is the Nutrition Supervisor for the Joliet Park District. She is a Registered Dietitian and a NASM certified personal trainer.

Gloria has served the Will County community in several positions including as a Commissioner for the Will County Board and the Forest Preserve District of Will County as well as a board member for the MAPP Collaborative and the Workforce Investment Board. Recently she worked with the Community Foundation of Will County as the Development Director. Currently she is a Board member at Joliet Area Historical Museum, where she chairs the Collection’s committee, a member of the Rotary Club of Joliet, and a member Ascension St. Joseph – Joliet Auxiliary.

Ed and Gloria have three children: Matt, Casey, and Nathan. They are parishioners at St. Paul the Apostle Parish.

Michael Turk
After dedicated service on the Joliet Park Board, Michael F. Turk ran for and won his Joliet City Council seat in 1987. Serving in that capacity for 34 years, Mike is most proud of his dedication to being responsive and accessible to his constituents.

Having worked in auditing and accounting for nearly 40 years, Mike took great pride in his stewardship of funds dispersed by the City Council. Notable events in the City of Joliet during his tenure include the inception of riverboat gambling and the subsequent revenue sharing with Joliet schools and the Rialto; the elimination of costly vehicle stickers; construction of DULY Field, home of the Joliet Slammers; and construction of the Joliet Library Black Road Branch.

Mike continues to be involved in the community as a board member of the Joliet Park Foundation, member of the Old Timers Baseball Association of Will County, and as an usher at the Cathedral of St. Raymond Church.

Mike is married to his wife, Kathleen. They are parishioners at the Cathedral of St. Raymond Parish.