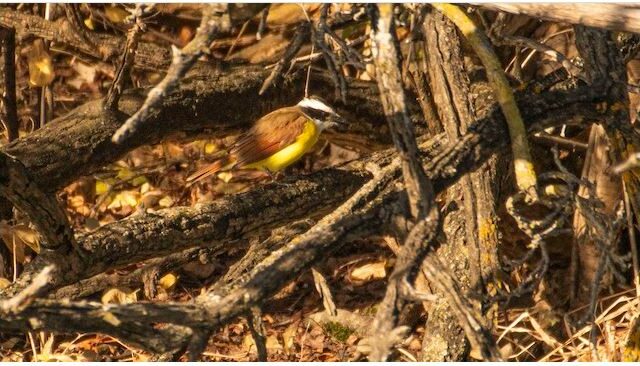 The past few months have been something special for rare bird sightings in Will County, but the most recent one is a once-in-a-lifetime encounter in the form of a great kiskadee.

The bird, whose range is from the far southern tip of Texas through Central and South America, was recently spotted in Channahon along Front Street, just northeast of McKinley Woods – Kerry Sheridan Grove. This is the first ever recorded sighting of a great kiskadee in Illinois, according to eBird.

The great kiskadee was reported Tuesday by John Weisgerber and later posted on the Illinois Rare Bird Alert Facebook Group.

Bob Bryerton, an avid birder and program coordinator for the Forest Preserve District, said odds are this is the only great kiskadee in the area.

“When they show up like this, with rare sightings, it’s just one bird,” Bryerton said. “That’s the thing with birds, you go bird watching and you never know what you’ll see. They fly and there is no barrier to where they can go. They show up in real weird places.”

That fact that these rare sightings are often with one bird instead of multiples makes them even more special.

“The bird’s going to be flying, maybe perched in a tree, maybe not,” Breyerton said. “You have to be in the right place at the right time.”

This is just another in a string of rare sightings lately. For example:

Bryerton said he recently saw an Anna’s hummingbird just over the border in Indiana, which also shouldn’t be here; they are West Coast birds.

“One possible explanation for the Anna’s hummingbird is the wildfires in California, which caused it to get disoriented,” he said. “Between wildfires and hurricanes we’ve had this year, it’s possible that is having an impact. Maybe the hurricane spun (the great kiskadee) out and it followed the wind current.

“I don’t think there is enough research to understand why this happens. It’s hard to say how it ended up here.”

But the bottom line is it’s here now, in a much colder climate that it’s used to. Great kiskadees eat beetles, grasshoppers, spiders, millipedes, lizards, snakes and small mice.

“If it is finding food, that’s good,” Bryerton said. “Our weather is going to change quickly and it could be in trouble. Since it’s not normally from here, it may not notice that it’s got to go.”

To sign up for birding programs hosted by the Forest Preserve District, visit the Event Calendar at ReconnectWithNature.org.