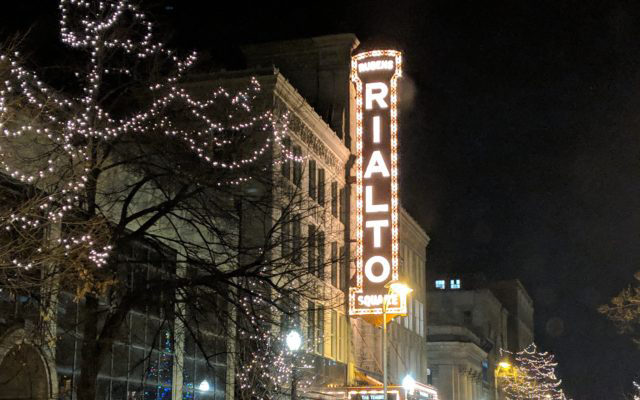 The VenuWorks-managed Rialto Square Theatre just announced their Dinner & A Quarantine Concert event in partnership with Bella Cucina Catering. This event will take place on Thursday, May 21, 2020. Patrons will be able to place orders for dinners from Bella Cucina Catering that can be picked up from 4-6pm on the 21st.

Each dinner costs $12/person and includes a serving of Bella stuffed chicken, asiago bow tie pasta, Bella lettuce salad, a roll & butter, and a dessert bar. Orders must be placed by May 19, 2020 and should be requested by email to [email protected], along with a requested pick-up time. A portion of the proceeds from each meal will be donated to Rialto Square Theatre.

At 6:30pm, Rialto Square Theatre will be live-streaming a concert to their YouTube and Facebook pages. This concert will feature local talent that is to be announced and will be free for all to stream.  After the concert has concluded it will still be available for viewing via Rialto Square Theatre’s social media and website.

Rialto Square Theatre and Bella Cucina Catering are incredibly excited to be offering this unique dinner and concert experience to our loyal patrons during these difficult times.

To hear the entire interview with Val Devine Executive Director of the Rialto Square Theatre click below.

Meanwhile last Friday, Rialto Square Theatre live-streamed our third Quarantine Concert featuring Judy Matarelli on our Barton Grand Theatre Pipe Organ. Today, May 15th at noon, they will have our fourth Quarantine Concert, featuring Jim Patak. This concert will be live-streamed to our Facebook & YouTube pages and will then be added to our website.

Jim Patak was born in Chicago in 1931, before moving to North Riverside, IL. He attended Proviso Township High School, and then went on to major in Music Education with a minor in Organ Performance at Chicago Musical College. After obtaining his bachelor’s, he studied at Northern Illinois University, where he received his master’s degree. He taught 8th grade math for 35 years at Komarek School in North Riverside.

Jim has been married to Dolores for 68 years. They have three children– James, Connie, and Gayle, four grandchildren– Matthew, Bradley, Christopher, and Douglas, and four great-grandchildren– Kayden, Grayson, Lenali, and Imri. Jim has lived in Westchester, IL since 1954.
Jim has been a member of JATOE (Joliet Area Theatre Organ Enthusiasts) since 1984 and was the president from 2002-2018. He is currently the Treasurer and in charge of Membership for JATOE. He has played the Rialto Barton since 1992 for shows, tours, and weddings.
Jim will be playing the following:
Sounds Of Wonder – Lyn Larsen
Serenade – Sigmund Romberg
La Cage Aux Folles/Best Of Times– Jerry Herman
How Long Has This Been Going On -George Gershwin
Wake Up And Live – Mack Gordon
Nightingale Sang In Berkeley Square/London By Night – Sherwin/Coates
Midnight The Stars And You – Woods
It’s De-Lovely – Cole Porter

On With The Show – David/Livingston