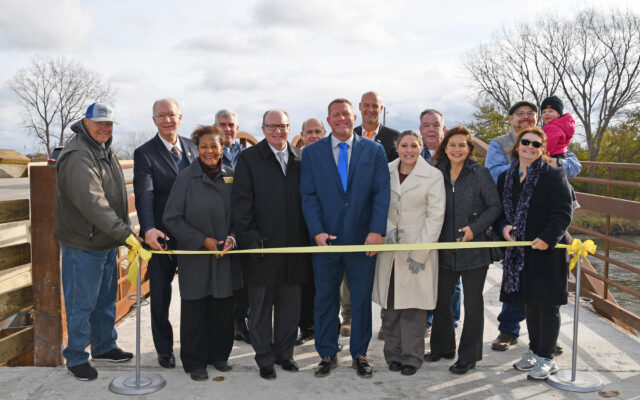 Officials gather Friday, November 12, for a ribbon cutting in Hammel Woods to mark the opening of a trail connection along Black Road that will link the DuPage River Trail in Shorewood with the Rock Run Greenway Trail in Joliet. (Photo by Forest Preserve staff | Glenn P. Knoblock)

A Forest Preserve District of Will County trail connection that stretches from Shorewood to Joliet along Black Road opened for public use on Friday, November 12, following a public ribbon cutting ceremony.

“This bridge is going to increase the safety of walkers, runners and bikers,” said U.S. Rep Bill Foster. “… And it’s going to help everyone who is trying to get out on these trails to explore everything our region has to offer.”

Foster noted that two federally funded grants helped pay for the Black Road project, and that a recently passed federal infrastructure bill will include “many billions of dollars directed toward projects exactly like this that make our highway systems complete with the addition of pedestrian and bike trails alongside.”

Forest Preserve Executive Director Ralph Schultz said the project, which was first conceived in 1999, was long overdue. For a video detailing this 22-year journey, visit bit.ly/blackroadproject.

Now that it has been completed, the trail connection will tie together more than 35 miles of trails in Will County and three times that using an interconnected network of roads and other regional trails, Schultz said. “The completion of this project furthers our ongoing efforts to make multi-modal transportation, wellness and enjoyment of our natural spaces more real.”

Forest Preserve Board President Joe VanDuyne said partnerships played a big role in getting the trail connection and other Forest Preserve improvements built.

“Our local, state and federal partners are important to achieving our mission to reconnect people to nature and to connect our communities,” he said. “Through the years, we’ve worked with local municipalities, park districts and townships along with state and federal agencies to build our forest preserve system and our trail network, and to restore natural habitats throughout the county. We know that together we achieve more.”

County Executive Jennifer Bertino-Tarrant said the Black Road project is an example of what makes Will County so “wonderful” and she thanked all the officials who helped make the connection possible. “Let’s keep fighting for projects like this because this is what’s important to our community,” she said. “This is what everyone gets to enjoy. We don’t think this is government, but this is government here and it’s helping our community.”

The project is a great addition to both the Village of Shorewood and the City of Joliet, said Forest Preserve Board member Don Gould . “I’m just glad to have worked on this, and I’m really glad to see this day,” he said.

Forest Preserve Board Vice President Rachel Ventura said both sides of the political aisle agree that the forest preserves are the “gem” of Will County. “And we want to keep protecting them, we want to keep growing them,” she said.

Connecting trails for safety and recreation is one of the ways the Board provides a healthier community for all residents, said Denise Winfrey, who chairs the Forest Preserve Board’s operations committee. “Will County is a great place to live, work and play and this is just another example of how we make that happen,” she said.

Among the elected officials who gathered for the ribbon cutting were two frequent Forest Preserve path users who were thrilled they were finally able to walk the new stretch of path over the DuPage River and I-55.

“I’m so excited,” said Susan Wietlispach. “I can now ride farther on my bike. It keeps me grounded and healthy and it’s fun.”

Her husband, John, agreed. The two Joliet residents, who recently celebrated their 35th wedding anniversary, plan to make frequent trips to the trails, which they have been doing since they were dating,” he said.

“This is a dream come true for my wife and I,” he added. “We’re avid bike riders and for there to be a connection between Rock Run and Hammel Woods is something we’ve been hoping for. We’re going to use it as much as possible. At our age, we need to spend as much time as we can on our bikes.”