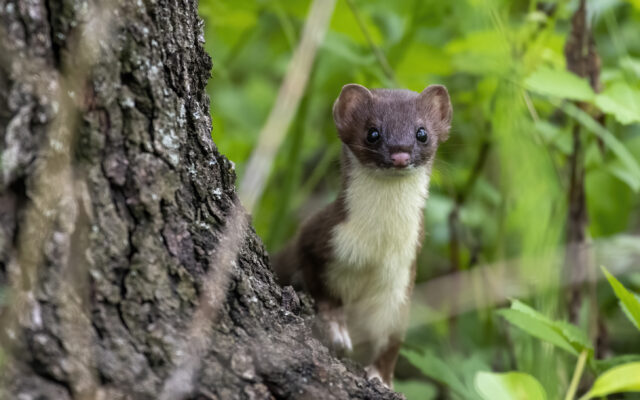 Romeoville resident Darek Konopka won May’s portion of the Forest Preserve District of Will County’s Preserve the Moment photo contest with this photo of a weasel at Rock Run Preserve. The contest will continue through December with monthly winners who will vie for overall honors via public voting on the Forest Preserve’s Facebook page in January 2022. (Photo courtesy of Darek Konopka)

A carnivorous weasel chewed up the competition in May’s portion of the Forest Preserve District of Will County’s Preserve the Moment photo contest.

Judges chose the picture as the winner from among 80 contest entries for its uniqueness and composition. The alert look on the weasel’s face and the contrast with the tree trunk and the soft green background make it a rare and appealing shot.

Darek Konopka of Romeoville snapped the photo at Rock Run Preserve. He said he was walking on the path when he saw something dark brown by the tree.

“He looked at me, turned his head a couple of times and vanished,” Konopka said of the weasel in an email after being notified of his win. “I was like ‘wow’! I never saw them before in the wild.”

Konopka said he was fortunate because he had his camera ready to shoot.

“I focused on his nose and fired away a few times,” he said. “I’m an amateur photographer, I love wildlife and I have been taking photos for about eight years.”

Honorable mentions in May were awarded to:

All photo contest entries can be viewed on the District’s Flickr page, Flickr.com/WillCoForests/albums.

The Forest Preserve’s sixth annual Preserve the Moment photo contest began May 1 and it runs through Dec. 31. Winners will be chosen monthly and eight finalists’ photos will vie for top honors in January via public voting on the District’s Facebook page. The contest showcases the beauty of Will County preserves and the flora and fauna they protect.

Photos must be taken by amateur photographers age 18 or older, and they must be snapped in a Will County forest preserve on or after the contest start date. Please read all contest rules and photo upload instructions at ReconnectWithNature.org before entering the contest.