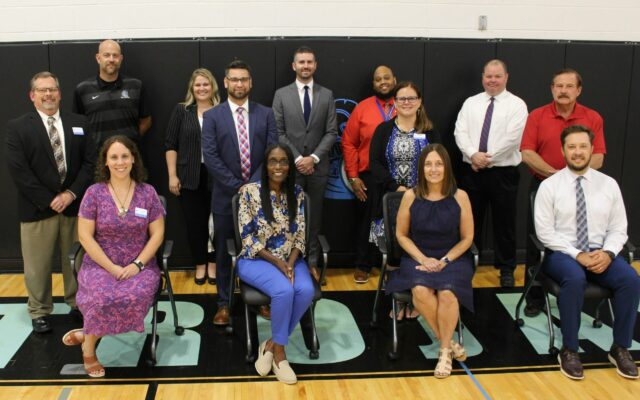 Some new administrators are serving the seven schools of Troy Community School District 30-C this year. They were recognized by the school board at its August meeting.

Libby Schwaegler will be Principal of Troy Heritage Trail Elementary School, replacing Brooke Allen. Schwaegler was previously Assistant Principal of Heritage Trail and has earned her Bachelor’s Degree in Mathematics with a minor in Secondary Education from the University of Illinois. She also has two Master’s Degrees – one in Teacher Leadership and Mathematics from Aurora University and the other in Educational Leadership and Administration from North Central University.

Brooke Allen is Fifth Grade Principal at William B. Orenic Intermediate School. Allen previously served as Principal of Troy Heritage Trail Elementary School. She has earned her Bachelor of Arts Degree in Elementary Education from Governors State University and her Master of Science degree in Educational Leadership from the University of St. Francis.

Jharita Jordan and Ryan Kabara are new Assistant Principals of Troy Middle School, replacing Liz D’Andrea and Mark Peter. Jordan previously taught ELA at Troy Middle school  and earned her Bachelor of Arts degree at Illinois State University and her Master of Arts degree at Concordia University. Kabara previously taught third and fourth grade in Minooka CCSD 201. He received his Bachelor’s Degree in Elementary Education from Aurora University and his Master’s Degree in Education Leadership from the University of St. Francis.

Alex Weinberg is the new Fifth Grade Assistant Principal at William B. Orenic Intermediate School. Weinberg previously served as eighth grade Science Teacher in Des Plaines Community Consolidated School District 62. He holds a Bachelor of Science Degree in Elementary Education from the University of Illinois, a Master of Arts Degree in Curriculum and Instruction from Olivet Nazarene University, and a Master of Arts in Principal Preparation from Concordia University.

Trevor Moore is Troy Executive Director of Finance and Operations. Moore was previously Chief School Business Official at Peotone District 207U. He received his Master of Business Administration degree from Ball State University and his Bachelor of Science degree from Eastern Illinois University.

Rheon Gibson is Director of Student and Family Services, replacing Marc Solodky. Gibson most recently was Principal of DeKalb CUSD 428. He earned his Bachelor of Science Degree in sociology from Northern Illinois University and Master of Education Degrees in school counseling and educational administration.

Jeff Bean will serve in the position of Safety and Security Coordinator. Bean was a Woodridge police officer and served as a D.A.R.E. officer with the Woodridge School District 68. He has a Bachelor’s Degree in law enforcement administration from Western Illinois University.