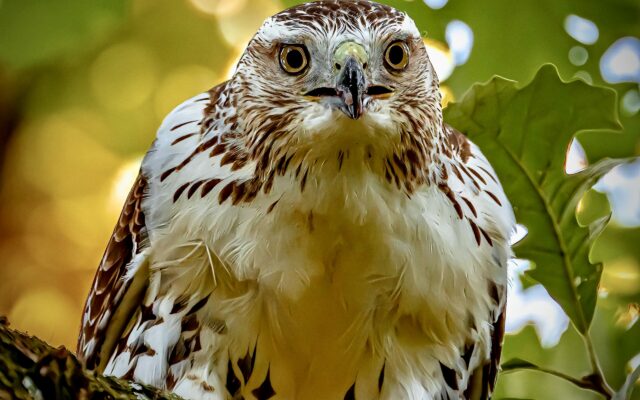 Shorewood resident Joe Viola won September’s portion of the Forest Preserve District of Will County’s Preserve the Moment photo contest with this shot of a red-tailed hawk at Hammel Woods. The contest continues with monthly winners through December. (Photo courtesy of Joe Viola)

A crystal clear closeup of a red-tailed hawk netted Shorewood resident Joe Viola a win in the Forest Preserve District of Will County’s Preserve the Moment photo contest.

Viola’s photo won the month of September after judges selected the top five photos from submissions and members of the public chose it as the best shot of the month. Viola snapped the photo at Hammel Woods preserve in Shorewood.

“I was pulling into the back lot by the river and saw the hawk swoop down and grab a rabbit alongside the road,” he said. “I wasn’t able to get my camera out the window fast enough to get a shot of it on the ground and it took off and flew into a nearby tree. I parked the truck and was able to get out and get close enough to watch and get some amazing shots of it.”

The four other finalists were:

The contest continues through December with monthly winners and overall winners will be picked in January via Facebook voting. Prizes, funded by The Nature Foundation of Will County, range from $75 gift cards for monthly winners to $500 for first place in the overall contest.