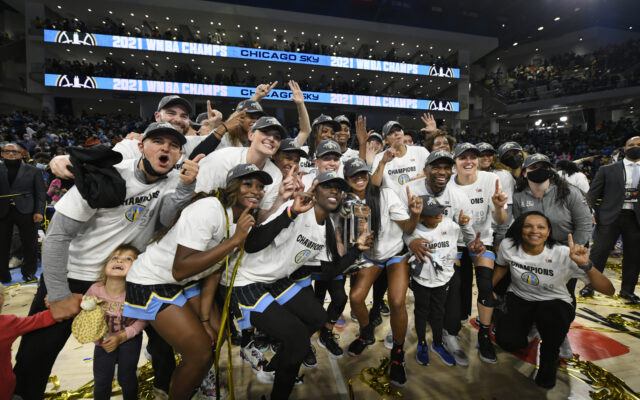 Members of the Chicago Sky pose for a photo after defeating the Phoenix Mercury in Game 4 of the WNBA Finals to become champions Sunday, Oct. 17, 2021, in Chicago. (AP Photo/Paul Beaty)

The Sky are WNBA champions for the first time in team history. Chicago secured the title after erasing an 11-point fourth-quarter deficit to beat the Phoenix Mercury 80-74 in game four of the WNBA Finals at Wintrust Arena. Joliet-native Allie Quigley scored a team-high 26-points for Chicago, which won the best-of-five series 3-to-1. Naperville-native Candace Parker, who signed with the Sky in the offseason, had 16 points, 13 rebounds, five assists, and four steals in the clinching effort. Kahleah Copper was named WNBA Finals MVP. Mayor Lightfoot tweeted that the city will celebrate the championship with a rally, with details coming soon.