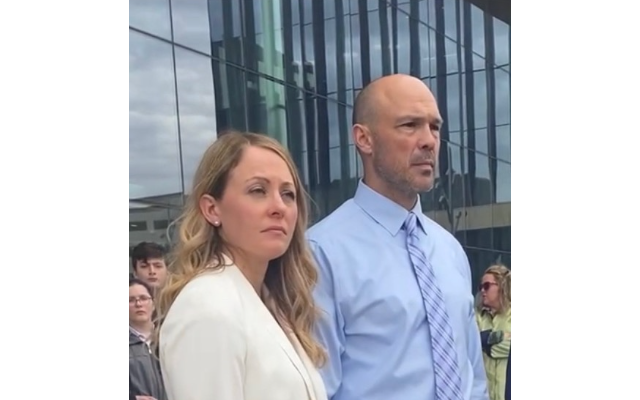 The first day of testimony at Will County Sheriff’s Deputy Ed Goewey’s disorderly conduct trial heard from several witnesses for the prosecution. Goewey has pleaded not guilty to the Class C Misdemeanor Disorderly Conduct Charge of December 3rd, 2021 related to his response following a threat of gun violence at this daughter’s seventh-grade classroom at St. Mary’s school in Mokena.

All testified that they thought Goewey was going to take matters into his own hands after arriving at the school following a report that a student was planning on bringing a gun to school and that student was remaining in the classroom.

Dexter admitted that she told Goewey that the police was never called concerning the student’s potential gun threat two days before, which was the reason Goewey was there in the first place.

The meeting with the counselor did not occur until 11 a.m. the following day according to Minix testimony.

Defense attorney Bob Bodach had Minix admit that there was no sense of urgency to neutralize the threat.

A video was shown to the jury which showed all people on the video, including Goewey and Conforti calmly standing in a hallway. Fr. Conforti testified that it was Goewey who even told everyone to move out of the eyesight of students so as not to alarm them. Goewey wanted the student who threatened gun violence removed from the classroom. It was Fr. Conforti who agreed he would remove the student but not until Goewey left, of which he did. The video did not show the deputy attempting to enter the classroom.

It’s expected that Goewey will take the stand in his own defense.