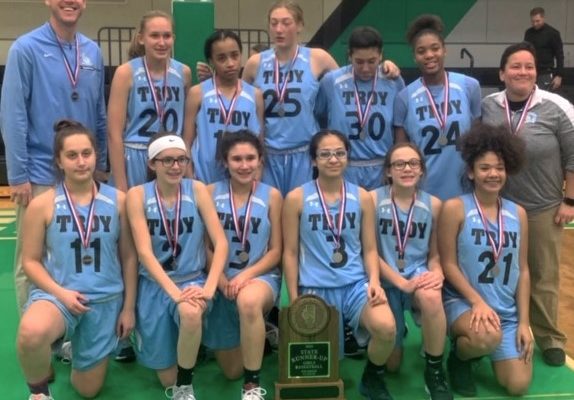 The Troy Middle School 8th Grade Girls Basketball Team placed 2nd in the state after wrapping up its season at Macon Meridian High School, competing for the IESA 4A State Championship. The team played Alton Middle School on December 19 for its final game of the season, with a win by Alton. The team ended the season with a 25-3 record.

“This year, it was really about the journey,” said Coach Serena Cruz. “These girls improved over the course of the year. I think the lessons learned about teamwork, persistence and hard work were priceless, and the memories they made are forever. Playing for the state championship was the goal, and they achieved that goal by working hard and trusting the process. This group of girls left their legacy and set the bar high for years to come.”

“The Troy 8th Grade Girls Basketball Team has been fun to watch over the past four years,” DeGroot said. “They are not only good athletes, but good students, as well. They work really well together on and off the court, which has helped them to bond and to get to this level of play. I am excited to continue to watch them in the future at the high school level.”