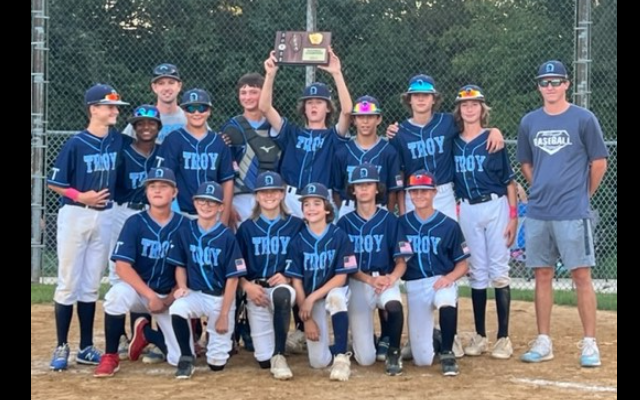 “The boys showed resilience coming back from an early 3-0 deficit with five unanswered runs,” Gernand said. “Andrew Markun has been our team MVP all year and came through with a huge two-run double that gave us the lead to secure the Regional Championship. He finished the season with an incredible .435 batting average and 13 extra base hits.”

“The players finished the season on a great note by bringing a regional championship back to Troy,” Barker said. “Colin Horvath pitched an absolute gem, which gave the boys an opportunity to fight for a sectional championship and a chance to get down to state. Unfortunately, we lost to the defending state champions, but the boys fought until the end and have a lot to be proud of. The future of Troy baseball is looking bright with the amount of talent our younger guys in the program have.”

“Watching the regional baseball games was the highlight of the season,” said Troy Director of Athletics and Activities Meagan DeGroot. “The boys battled every inning. I am so proud of their fight to never give up and to cheer each other on to a regional championship.”

The team is a part of Troy Community School District 30-C.