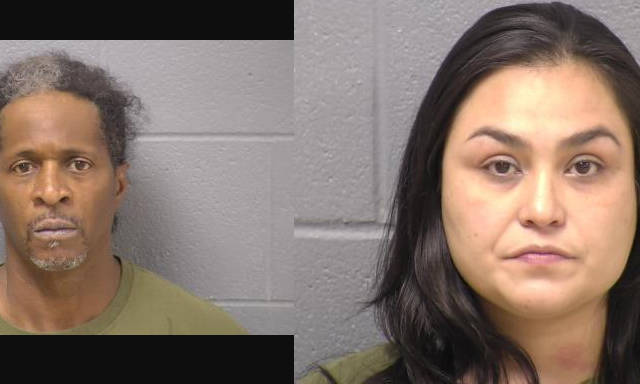 A 60-year-old Joliet man and a 33-year-old Joliet woman have both been arrested in connection to a disturbance at a local truck stop on Monday morning. It was at 12:23am that Joliet police were called to the Pilot Travel Center for a disturbance. Officers learned that 60-year-old Derek Creal was in an argument with his girlfriend, 33- Samantha Saucedo-Chavez. Saucedo-Chavez had been throwing items out of  Creal’s vehicle onto the ground and cursing at truck stop employees. She was placed into custody without incident stemming from the disturbance.

While on the scene,  Officers learned that Creal was seen dropping several items into the landscaping of the business prior to the arrival of the Police. After checking this area, Joliet officers recovered suspected cocaine, heroin, and prescription pills. Creal was then placed into custody without incident.

During processing, Saucedo-Chavez complained of a medical issue and a Joliet Fire Department ambulance was called to the Joliet Police Department. While being escorted to the ambulance, Saucedo-Chavez lunged at an officer, striking the officer in the chest. She was transported to Ascension St Joseph Medical Center and upon a search of Saucedo-Chavez at the hospital, Officers discovered cocaine.