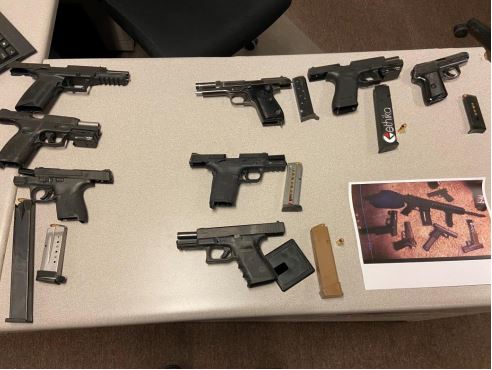 The Joliet Police have made two arrests in connection with various alleged weapons violations. On May 20th at approximately 8:27pm, members of the Joliet Police Department Special Operation Squad, Narcotics Unit, Tactical Unit and Patrol Division served a search warrant on a residence in the 300 block of Union Street after an investigation determined that residents of the home were in unlawful possession of numerous firearms. Upon search of the residence, Officers recovered one (1) 7.62 rifle, six (6) loaded 9mm handguns, one (1) .40 caliber handgun and one (1) 5.7 x 28mm handgun. Numerous rounds of ammunition of various calibers were recovered as well.

19-year-old Adrian Bailey has been charged with Aggravated Unlawful Use of a Weapon (5 Counts), Unlawful Possession of Firearm/Ammunition (5 Counts), and No FOID.

A 17-year-old juvenile has been charged with Aggravated Unlawful Use of a Weapon (6 Counts), Unlawful Possession of Firearm/Ammunition (6 Counts), and No FOID.