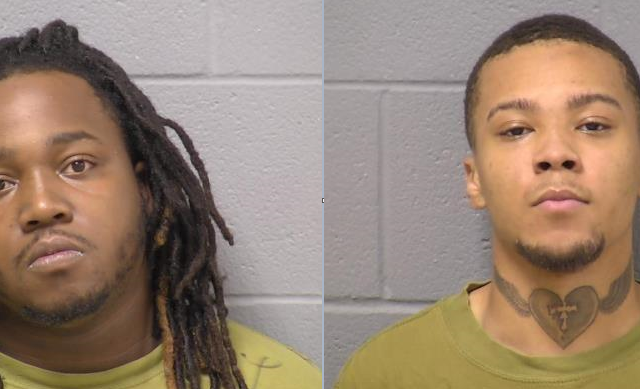 Two men have been charged in a shooting that took place Friday September 11th on Arthur Avenue in Lockport Township.

24-year-old Jesse Tucker, age 24, of Joliet was charged with aggravated fleeing/eluding police, reckless driving, and possession of a controlled substance.  Tucker is being held at the Adult Detention Facility on a $1 million bond.  Tucker has multiple prior drug charges and has served time at IDOC.

18-year-old Nevin McMurtry, of Romeoville was charged with possession of a controlled substance. McMurtry is being held at the Adult Detention Facility.   His bond was set at $750,000.

Tucker and McMurtry were apprehended by Illinois State Police after the Durango that Tucker was driving, crashed at I355 and 163rd Street after a high-speed chase that began on Arthur Avenue.  A search of the Durango was conducted where drugs were located.  The men were brought into the Sheriff’s Investigation Unit and were charged.

Two other individuals, who fled the Durango after the crash, were apprehended by the Lockport Police after they attempted to get away while running through the Willow Run Subdivision.  Both subjects were transported to the Sheriff’s Investigation Unit.  They were questioned by detectives, refused to cooperate, and were released without charges.

A fifth subject, whom police believe also fled from the Durango, remains at large.

The Will County Sheriff’s Office believes that additional arrests and charges will be forthcoming as the evidence and facts of this case are processed.