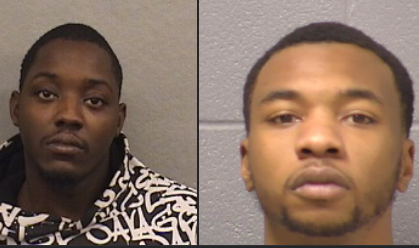 (Left: R. Caldwell Right: A. Hodge) Courtesy of the Will County Sheriff's Office

Two men connected to an armed robbery in Frankfort Township from earlier this year have been arrested  by Will County authorities. 23-year-old Alvin Hodge of Chicago and 25-year-old Rashe Caldwell of Riverdale have both been charged with aggravated armed robbery for their role in the robbery of Ryan’s Pub. It was back on April 30th at approximately 3:15 am that the Will County Sheriff’s Office was called to Ryan’s Pub at 7928 W. Lincoln Highway in Unincorporated Frankfort for a report of an armed robbery in progress.

One of the patrons had access to a firearm and was afraid that the suspects would shoot someone. The patron shot at the suspects, as they began to walk toward the entrance. The gunfire hit one of the armed robbers several times. The second robber, who was identified as Alvin Hodge, fled to a getaway car that authorities say was driven by Rashe Caldwell.

The suspect shot several times was identified as 20-year-old Triston Morrison Jr. He was pronounced deceased at the scene by the Frankfort Fire Protection District. Morrison was in possession of most of the proceeds from the robbery at the time of his death. Alvin Hodge is currently being held at the Will County Adult Detention Facility. Rashe Caldwell is currently in custody at the Cook County Jail. He will be transferred to the Will County ADF once his Cook County charges are satisfied.