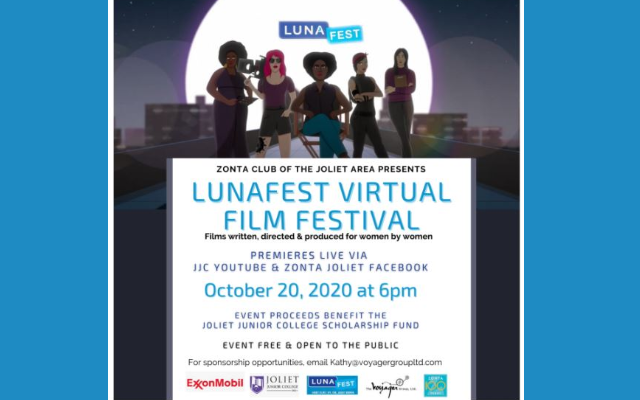 The Zonta Club of the Joliet Area is hosting LUNAFEST, a virtual film festival highlighting women as leaders in society. On Tuesday, October 20, 2020, seven short films will debut live via the JJC YouTube Channel and Zonta Facebook page. The films are written produced, and directed by women for women. Rated E for everybody, the creative films address topics relevant in today’s society such as women’s health, body image, relationships, cultural diversity, and breaking barriers. The event is free and open to the public thanks in part to the generous sponsorship of Voyager Group, Ltd. and ExxonMobil. “We have been looking forward to bringing the Lunafest experience to the Joliet area community” said Helen Hester Ross, president of Zonta Club of the Joliet Area.

This is the first year of this event for Zonta Club.  They are excited that JJC is partnering with them to raise money for their scholarship fund at JJC. This event is a great opportunity for the Joliet community to celebrate women in film and as leaders in society. These films are written, directed and produced by women. The theme of films are issues that women and girls deal with every day. Issues such as domestic violence, cultural diversity, LGBT, bullying and woman’s health issues.

LUNAFEST is committed to inspiring women, championing change, and demanding that equality be a right, not an option. Their festivals have been done all over the United States. Almost two decades ago, they recognized that women were painfully underrepresented in film. So in 2001, they created the first all-women traveling film festival. Their first screening was in California. Since then, they have opened opportunities for more than 150 women filmmakers, putting them in the spotlight. And as Kit Crawford, founder & co-CEO insists, “telling stories that have to be told.’