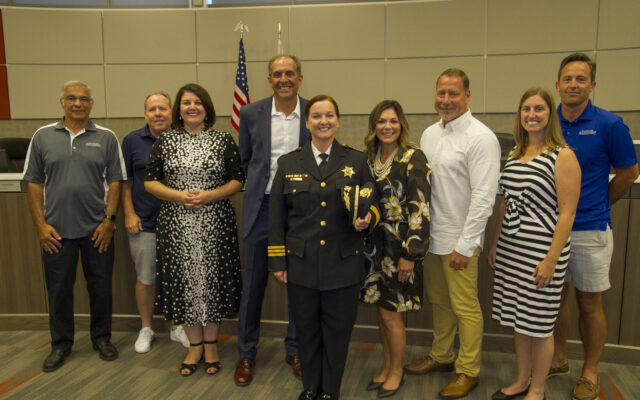 Frankfort Chief of Police Leanne Chelepis with the Frankfort Village Board at the August 16, 2021 meeting Photo Credit: Village of Frankfort

The Frankfort Village Board voted unanimously to approve a new police chief Tuesday night at its regularly scheduled board meeting. Frankfort Sergeant Leanne Bender-Chelepis was selected to replace outgoing Police Chief John Burica who was appointed as Assistant Village Administrator in July. Chelepis was chosen after interviews with three internal candidates for the post and was sworn into office at the August 16, 2021 Village Board Meeting.

Frankfort Mayor Keith Ogle is pleased with the selection and looks forward to her vision for the department. “We wanted a leader from within the department and we were fortunate that all three internal candidates were exceptional,” stated Ogle.

“Leanne has been with the department nearly two decades and has a vast array of experience from her work as a patrol person to her current role as Sergeant. Chelepis began her career in law enforcement back in 2002 as a patrol officer and in her 19 years with the department has risen to the rank of Special Services Sergeant, “overseeing crucial units within the police agency” including investigations, school resource officer, patrol and neighborhood patrol officers.

Chelepis is completing her Master’s in Public Administration and was named Police Officer of the Year Award- in 2015 by the Frankfort Kiwanis Club. Chief Chelepis lives in Frankfort with her husband and three children.