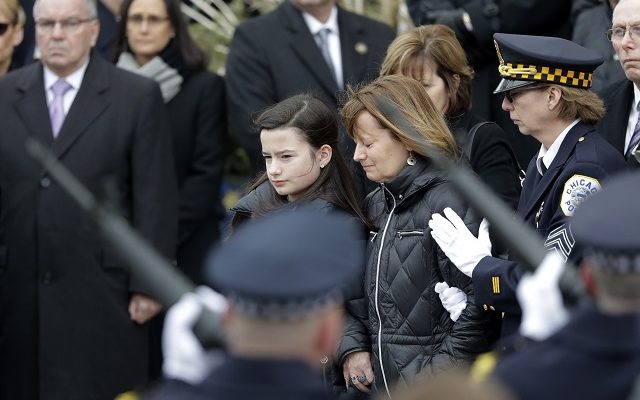 Erin Bauer, center, reacts to the 21-gun salute with her daughter, Grace, left, and a member of the Chicago police department after a funeral mass for her husband police Cmdr. Paul Bauer outside the Nativity of Our Lord Catholic Church Saturday, Feb. 17, 2018, in Chicago. Bauer, 53, a 31 year veteran of the police department, was fatally shot as he went to assist tactical officers pursuing Shomari Legghette in downtown Chicago Tuesday. (AP Photo/Charles Rex Arbogast)

The widow of slain Chicago Police Commander Paul Bauer is suing the website used to sell the gun tied to her husband’s murder. The pistol that Shomari Legghette is accused of using to kill Bauer in 2018 at the Thompson Center in the Loop was sold by a Wisconsin man on Armslist.com, one of the nation’s largest online gun marketplaces. A federal lawsuit filed yesterday in Milwaukee claims the site allowed the sales of weapons without background checks, which led to Legghette getting his hands on the suspected murder weapon. Legghette’s murder trial is expected to start later this month.