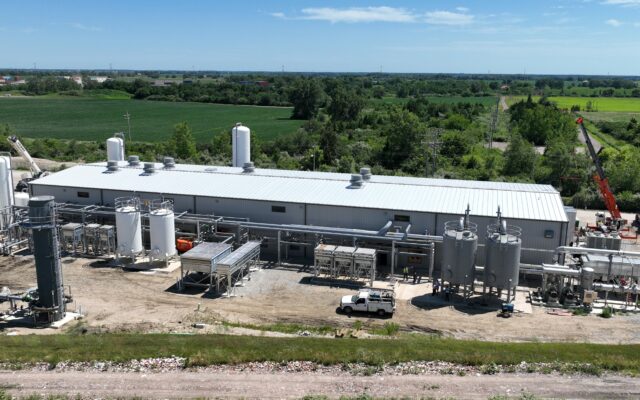 An overhead view of the Will County Renewable Natural Gas Plant, located next to Prairie View Landfill.

Will County Executive Jennifer Bertino-Tarrant joined Will County Board Speaker Mimi Cowan and members at a ribbon cutting on Friday, October 21st to celebrate the county’s new Renewable Natural Gas (RNG) Plant in Wilmington. The plant will capture and repurpose methane gas emitted from the county-owned Prairie View Landfill, providing a significant source of non-tax revenue for Will County and a carbon-neutral alternative to conventional natural gas.

“This forward-thinking initiative will help fuel the clean energy revolution in Illinois,” said County Executive Bertino-Tarrant. “This self-sustaining project will provide significant environmental and financial benefits well into the future. The RNG plant is a major accomplishment for our county and I’m thankful for the strong collaboration that made this project a reality.

The RNG Plant project began with a vision to maximize the financial benefits of Will County’s ownership of Prairie View Landfill. The self-sustaining plant is projected to raise millions of dollars for Will County capital projects through both the sale of gas and credits paid for by fossil fuel providers.

“The creation of the RNG plant is a huge step forward for Will County with both environmental and financial benefits,” said Speaker Cowan. “Working with the County Executive’s office, the Board was able to turn this long-time planned project into a reality.”

The RNG Plant will clean methane, which is a potent greenhouse gas produced by landfill waste. Instead of burning methane in a flare into the atmosphere, the RNG will upgrade it to renewable natural gas that can be sold and distributed externally. The plant is expected to capture at least 93% of methane produced within Prairie View Landfill.

“Will County is a leader in the State of Illinois on environmental issues that will benefit our constituents,” said Board Minority Leader Mike Fricilone. “Despite some challenges both locally and at the federal level with this project, the County has overcome these obstacles and made the vision of creating additional revenue from the county’s landfill real.”

The renewable natural gas produced at the plant will be sold on the open market as an alternative fuel source for large-scale transportation vehicles. As a transportation fuel for energy-efficient vehicles, the gas sold from the RNG plant will power the equivalent of 150 million miles traveled annually.

“The Will County Board has worked in a bipartisan way to move this great project forward,” said Board Capital Improvement Chair Herb Brooks. “This was not something that happened overnight, but required lots of work by many Board members. I am pleased to see this important capital project get completed.”

Only the second of its kind in Illinois and the first in the Chicagoland region, the RNG plant joins a nationwide trend to utilize landfill waste as a clean energy power source.

“Construction of the RNG plant was a significant investment into our local businesses,” added Bertino-Tarrant. “Will County capital projects are successful because of the strong pool of trained local labor.”

Will County previously converted a portion of the methane gas produced by the landfill to power a 4.8 megawatt Gas to Electricity (GTE) plant, as part of an agreement with Waste Management. The county’s GTE Plant recently ceased operation in preparation for the RNG plant.

“I am very pleased to see the benefits of converting the former gas-to-energy plant into a new renewable natural gas plant,” said Board Majority Leader Meta Mueller. “We have worked through a number of issues, and we are proud to officially launch this new plant.”