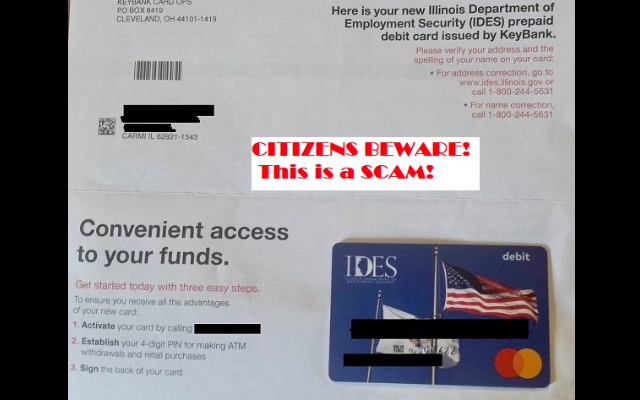 The Will County Sheriff’s Office is reminding citizens to be aware of the many scams that have flooded the public over the past few years.  Since January of 2020, the Sheriff’s Office has taken 318 reports from citizens regarding identity theft, 83 reports of credit card fraud, and 55 reports of fraud.  The majority of residents who reported did not fall victim to the scams however, some did and with these high number of reports taken it bears repeating to remind residents to be aware.

In October and November alone, the Sheriff’s Office received over 140 complaints from residents regarding the Illinois Department of Employment Services scam.  This scam consists of residents receiving a letter with a pre-paid credit card confirming approval of unemployment benefits.  In these cases, the resident did not apply for unemployment. The thieves have applied for unemployment using your name and personal information. They then have the method of payment switched to direct deposit, which means the money is going straight to the thieves’ bank account. However, if there is money on the card and a fraud victim ends up spending that money, IDES says that person would be responsible for repaying that money to the state because they are fraudulent funds.

IDES asks residents to file a police report and to report the fraudulent card to them online or call their identify theft hotline at 866-999-5630.  It is also advised that residents contact credit bureaus to file a fraud alert and keep a close eye on personal banking accounts.

Additionally, the Sheriff’s Office continues to get reports from residents regarding fraudulent cell phone calls for Warrants for your arrest and breach of your Social Security number.  We are reminding citizens that the Sheriff’s Office does not call individuals who have a warrant out for their arrest and they do not ask for money to make the warrant disappear.  In one recent complaint, the victim received such a call and lost $9,000 to this scam believing he had a warrant and would be arrested if not paid.  An easy way to check if you have a valid warrant is to visit:    www.willcountywarrants.com

The Social Security scam is also on the rise with several reports filed.  These thieves use several different phone numbers, may call consistently for days, leave you a message if you do not answer, and state that they are from Social Security and that your SS# has been flagged for fraud. They ask the unknowing victim to confirm their SS number so they can reactivate it and ask for a fee to complete the transaction. Once they receive your social security number, it most likely will be very damaging to your financial accounts and credit. One recent victim lost over $30,000 to this scam.   Visit www.ssa.gov if you are receiving these calls to file a report.

The Sheriff’s Office is asking citizens to share this information with friends and loved ones so they do not fall victim.  A general rule is Do Not answer your phone if you do not recognize the number.  If you do answer and realize it is someone from these agencies and you have not called them prior, simply hang up the phone.  Any fraud reports can be made on the Sheriff’s website:  www.willcosheriff.org – click on ‘online reporting’.