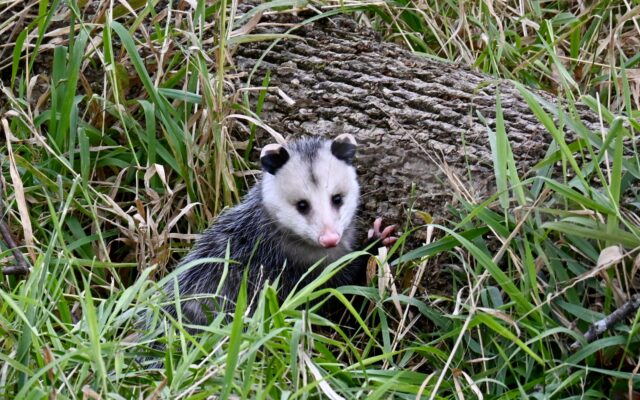 Joliet resident Teresa Wisnieski, who works as an ER tech at Edward Hospital in Naperville, won November’s portion of the Forest Preserve District of Will County’s photo contest with this photo of a baby opossum. (Photo courtesy of Teresa Wisnieski)

A cuddly-looking baby opossum nestled in the woods won November’s portion of the Forest Preserve District of Will County’s Preserve the Moment photo contest.

The picture was taken by Teresa Wisnieski at Lower Rock Run – I&M Canal Access in Joliet.

Wisnieski of Joliet, who is an emergency room technician at Edward Hospital in Naperville, said her hikes in the preserve and her wildlife viewing and photography have all helped with the stress of the COVID-19 pandemic at work.

“It has been a great source of happiness during the pandemic,” she said. “It is such a good stress reliever to get outside and be in nature. It’s a great source of relaxation. That preserve is so full of wildlife and nature and it’s ever changing.”

On a recent hike, she heard some rustling in the woods and looked down and saw a large opossum foraging for food. She watched it for a while until she noticed a baby opossum waiting for the larger opossum, which appeared to be the baby’s mother. So Wisnieski quickly snapped some photos of the pink-nosed baby, with its pink paw resting on a fallen tree, and then left it alone so as not to disturb the creatures.

“It made me smile because it’s such a cute little opossum,” she said of the marsupial in her winning photo. “So I thought I would share it (to the contest) because it brought me some joy.”

Wisnieski also has begun sharing her photos to the Forest Preserve’s Will County Wildlife Facebook Group.

“I look forward to continued walks in the preserves and sharing my photos with others online,” she said. “Thanks to those behind the scenes who give us nature lovers a place to go to share photos and also stories to read that help us learn more about the nature and preserves in Will County.”

Wisnieski is the seventh monthly winner in the 2020 photo contest. Only one more monthly winner will be chosen by a panel of judges before the contest concludes Dec. 31. In January, all eight monthly winners will vie for top honors via public voting on the District’s Facebook page.

Monthly photo contest winners receive $75 gift cards. Overall winners chosen in January will receive MasterCard gift cards worth $500 for first place, $250 for second place and $150 for third place. The photo contest is sponsored by The Nature Foundation of Will County.

For more details on the contest, including how to enter and the rules, visit ReconnectWithNature.org.