UPDATE: WJOL on the Latest Regarding Protests in Will County 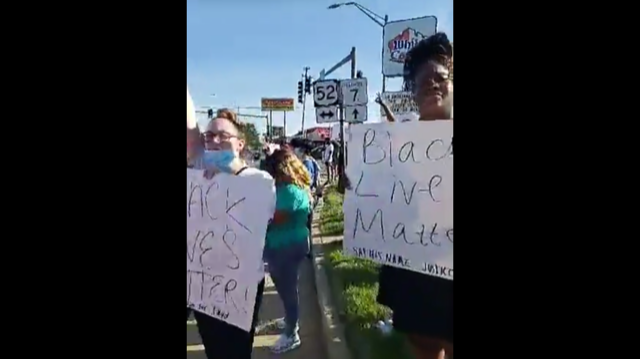 UPDATE 8:37pm: The latest on protests in Joliet from Scott Slocum

  The mood in Joliet is changing. #wjol #BlackLivesMatter #joliet

UPDATE 6:34pm: The latest from Larkin and Jefferson in Joliet with Kevin Kollins UPDATE 5:37pm: The latest from Scott Slocum on protests in Joliet

UPDATE 3:59pm: WJOL’s Scott Slocum on the latest regarding the protests in Will County

Due to reports of protesters moving through the Will County area the Frankfort Police have sent out an alert to residents that reads as follows “There are reports of large groups of protesters in several suburban areas.  As a result, many local retailers are closing stores.  We ask our residents to remain at home, be cautious, and if you see anything suspicious call police immediately.”

WJOL has learned that in light of these reports of protesters several big box stores in New Lenox have voluntarily decided to close early for the day. Mayor Tim Baldermann in a statement on his Facebook page asked that all residents stay “safe to home” and informed residents that police and emergency personnel around town and prepared should anything occur but that nothing has occurred in New Lenox as of yet. He also reiterated that a majority of business have closed for the day.