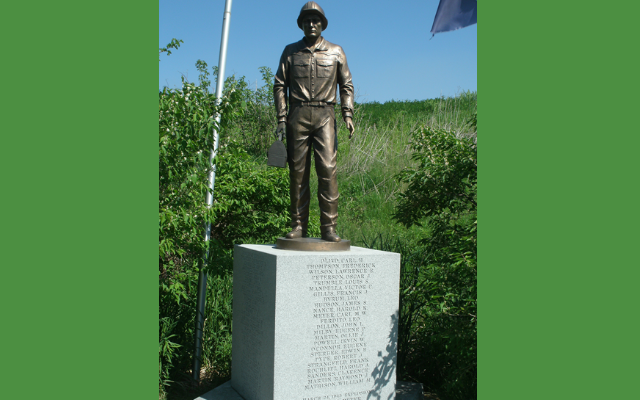 The Arsenal Worker statue and pedestal, commemorating those civilian workers who lost their lives on the Joliet Arsenal during WWII, as it currently stands on land adjacent to the Abraham Lincoln National Cemetery. Photo: Joseph Wheeler, USDA Forest Service, Midewin National Tallgrass Prairie

In 1940, the United States Army acquired over 43,000 acres of land in southern Will County to build a large explosives manufacturing plant, called Kankakee Ordnance Works, and an ordnance assembly plant, called and Elwood Ordnance Plant.  By late 1941 the plants were in full production to support America’s efforts in World War II.  There were 77 other similar plants built by the U.S. military, yet at the time of its construction, this manufacturing procurement was revered as one of the largest and most sophisticated.  The Elwood facility loaded over 926 million  bombs, shells, mines, detonators, fuzes, and boosters. The Kankakee facility set a national record producing over one billion pounds of TNT Over 20,000 mostly local residents were employed at both plants.  In the early morning hours of the 5th of June, 1942 an explosion occurred in Load Assemble Package Group 2 of the Elwood Ordnance Plant.  In the accident, 48 civilian arsenal workers lost their lives in an instant.  Subsequent accidents claimed the lives of five more workers at the plants.  These two separate plants were combined in 1945 to create the Joliet Army Ammunition Plant which helped in the manufacturing of munitions for the Korean War and the Vietnam War. TNT production ceased in 1975 and the facility was declared inactive in 1976.

On 4 June, visit Midewin National Tallgrass Prairie at 10 a.m. for the rededication of the statue in honor of the civilian arsenal workers killed in World War II.  Elmo Younger of the Joliet Arsenal Advisory Board will be a featured speaker. The event will also acknowledge late Lorin Schab, former President of the Midewin Heritage Association, who worked to ensure the history of the arsenal is not forgotten.  The statue will be placed in a wayside exhibit on the Group 63 loop trail, which encompasses just one of the many bunker fields that were built throughout the arsenal era, along with interpretive signs that will tell the story of the Joliet Army Ammunition Plant.  Visit Iron Bridge Trailhead where you will be guided to the wayside, located at the west Group 63 loop trail and the Group 63 spur intersection.