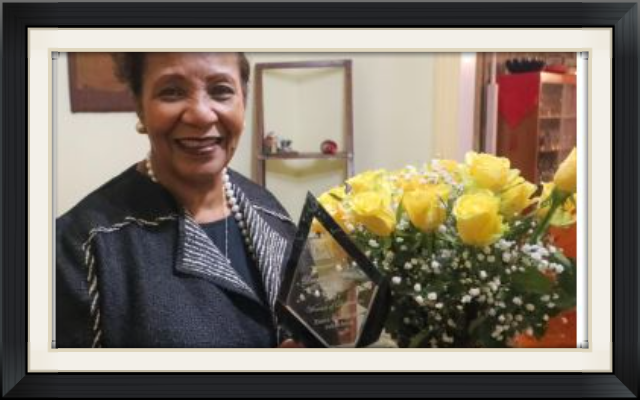 The Zonta Club of Joliet named Denise Winfrey, their 2021 ‘Woman of Distinction’. Each year, the club honors a community member who actively works to support and improve the status of women and girls and/or has a history of leadership and success in a non-traditional role as a woman. Winfrey was selected as Zonta’s keynote speaker for Women’s History Month. At the
end of the facebook live presentation on March 9th, President Helen Ross surprised her with the honor while other Zontians were on hand to present the actual award.

“We celebrate Denise Winfrey for her inspired leadership locally, statewide and nationally,” said resident Helen Ross. “She’s committed to protecting the rights of girls and women to have
better access to safety, education and healthcare. She exemplifies the kind of role model that every girl or woman should want to emulate in their professional life.”

Winfrey is currently a Will County Board Member for District 8, and a commissioner of the Forest Preserve. She was most recently the first woman and first person of color in 40 years to be Will County Executive. She was appointed to that position to fill a vacancy due to the passing of the previous County Executive. In that role, she was responsible for representing the interests and positions of the board to other local, state and federal legislatures and agencies. Prior to that, she was Speaker of the Will County Board, the first woman to do so. Winfrey is also the second Vice President of the National Association of Counties which covers 3,069 counties across the United States. She is also the president of the Board of the Will Grundy Medical Clinic and has been a member of the Joliet chapter of the National Hook-Up of Black Women for 20 years.

“I am humbled and honored to receive this award” said Denise Winfrey. “I enjoy interacting with Joliet Zonta and fully support their efforts on behalf of Women. Each of us has the responsibility
to make the world a better place for those who will follow. There is an old spiritual titled, ‘Let the work I’ve done speak for me’. My hope is that my work will be an encouragement to someone.”