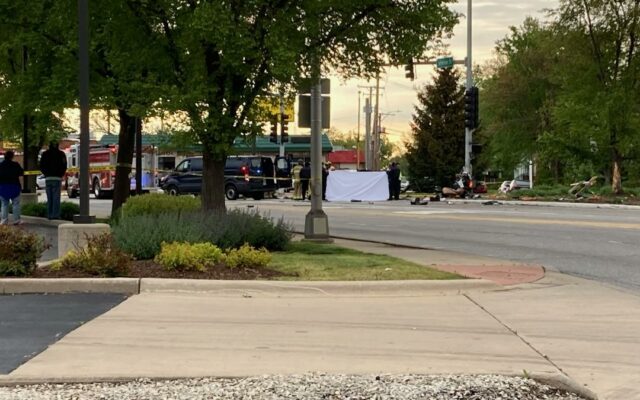 Joliet Police Update: On May 10, 2021 at approximately 2:44AM, Officers responded to the intersection of West Jefferson Street and Raynor Avenue in reference to a single vehicle accident with injuries.

A preliminary investigation of the accident indicates that a sedan was eastbound on West Jefferson Street approaching Raynor Avenue, at which time it appeared the vehicle failed to negotiate a curve in the roadway. The vehicle left the roadway and struck a tree and traffic signal, causing the vehicle to break apart. A male occupant was ejected from the vehicle. This male and an additional occupant of the vehicle were pronounced deceased at the scene. The Will County Coroner’s Office has identified the two victims as Jonathan Bundley, a 31 yr old male resident of Chicago and  William Burke III, a 55 yr old male resident of Chicago.

A third occupant was extricated from the vehicle and was transported to Amita St Joseph Medical Center with serious injuries.

This accident is currently under investigation by the Joliet Police Traffic Unit.