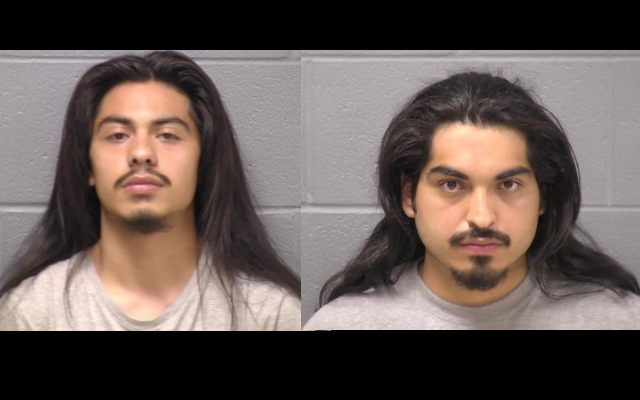 Will County Sheriff’s deputies responded to the 500 block of Miami St. in Joliet Township around 11pm, Tuesday, June 14, regarding a shots fired call.  Upon arrival, deputies met with two individuals (a male in his 40’s and a female in her 30’s) who stated that while sitting on their front porch two known subjects approached them on foot and began firing several rounds at them.  The subjects then fled the scene.  The victims identified the subjects as John Roy Hernandez, Jr. and Angel Santiago-Vargas.

The male was not injured however, the female, an acquaintance of the male victim, suffered two non-life threatening gunshot wounds; one to her right elbow and to the top of her right foot.   East Joliet Fire transported her to Silver Cross Hospital where she was treated and released.

While canvassing the area deputies discovered eleven 9mm handgun casings in the roadway, broken glass to the front door, and multiple bullet holes in the siding of the home.

Due to deputy’s knowledge and several prior encounters with Hernandez, Jr. and Santiago-Vargas, several deputies and Joliet Police officers responded to the area of the 700 block of Garnsey Avenue where the suspects were known to frequent.  When officers arrived, they located the two subjects and a foot pursuit immediately ensued.  Hernandez and Vargas were apprehended by officers.  Both were interviewed by detectives, both refused to cooperate, and both were ultimately charged.