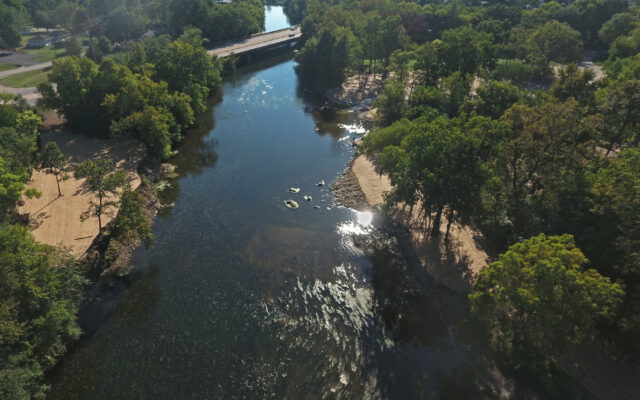 The limestone-and-concrete dam in the DuPage River at the Forest Preserve District of Will County’s Hammel Woods preserve in Shorewood has been removed and the site has reopened for public use. (Photo by Forest Preserve staff | Chad Merda)

The limestone-and-concrete dam in the DuPage River at Hammel Woods preserve in Shorewood has been removed and the site has reopened for public use.

The river is open to paddlers, and the parking lot and DuPage River Trail near the dam also have reopened. A new kayak/canoe launch built downstream of the old launch also is open for use. The dam area was located in the southernmost portion of the preserve, an area known as Grinton Grove, which is just north of Route 52.

“I’m glad that the Forest Preserve District had this opportunity to make such a positive impact on the ecology of the DuPage River while also enhancing safety and recreational enjoyment for paddlers,” said Ralph Schultz, the Forest Preserve District of Will County’s executive director. “I also appreciate our partners along the river in Will County that made this project possible. We all benefit when working together to improve the health of the river by restoring it to its natural function.”

The dam was built in the 1930s by the Civilian Conservation Corps to create a recreational pool of water when there was less water in the river. But studies performed in 2003 by The Conservation Foundation and in 2017 by the Forest Preserve District showed the river would be healthier without the dam because aquatic creatures would be free to move upstream. Also, the site will now be safer for paddlers who travel the river because they will not have to portage around the dam.

As part of the dam removal and modification work, which began in July, large rocks were placed in the river at the site to create riffles that will oxygenate the water and also provide an interesting and splashy area for paddlers.