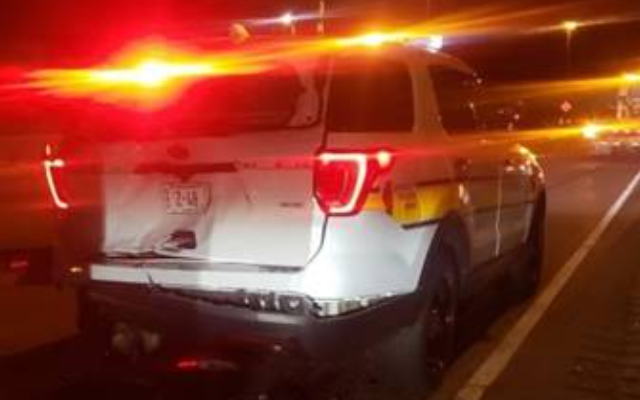 On the above date and time, an ISP Trooper was stationary in the right lane with emergency lights activated assisting a stopped motorist.  A black 2023 Land Rover Velar, traveling southbound, failed to yield to the stationary emergency vehicle and struck the rear end of the ISP squad car.  The Trooper was outside of the car at the time of the crash and there were no injuries reported as a result.  The driver of the Land Rover, Yuri F. Ferreira Da Silva, 28-year-old of Hoffman Estates, IL, was arrested for Driving Under the Influence and issued a citation for a violation of Scott’s Law – Improper Passing of a Stationary Emergency Vehicle.

There have been 21 ISP Move Over Law-related crashes this year and eight Troopers have sustained injuries.  ISP is reminding the public of the requirements of the Move Over Law, otherwise known as “Scott’s Law”.  When approaching an emergency vehicle, or any vehicle with their emergency or hazard lights activated, drivers are required to slow down AND move over.  A person who violates Scott’s Law, commits a business offense and faces a fine of no less than $250 or more than $10,000 for a first offense.  If the violation results in injury to another person, the violator’s driver’s license will be suspended for a mandatory period of anywhere between six months and two years.  Additional information can be found at the following link: