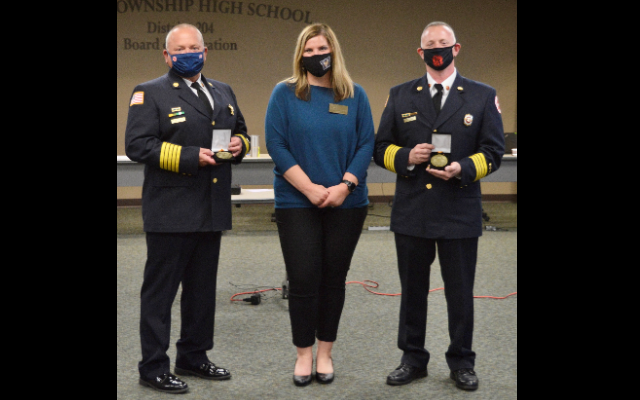 Joliet Fire Chief Greg Blaskey and Deputy Chief Jeff Carey received the 2021 Joliet Township High School Superintendent Medallion at the May Board of Education meeting for their leadership in implementing the COVID vaccine clinic at Joliet West High School.

The history of the clinic’s establishment at West is one of a community coming together in a time of need.  Will County was hit especially hard by the pandemic with more than 1,000 deaths.  With high case counts in the community, the impact on education has been hard families with the last “regular” school day in March of 2020 and the majority of learning taking place online since then.  So when access to the vaccine became available to educators on January 6, distribution was anxiously awaited, particularly for teachers and school staff returning to the classroom.

It only took one day to mobilize a community effort to get vaccines to educators under the leadership of Chief Blaskey and Deputy Chief Carey.  On January 7, Dr. Guseman received her first email from Carey letting her know that the Joliet Fire Department was teaming up with Amita St. Joe’s Hospital and the Will County Health Department to try and get the vaccines out faster. “Within that email, Deputy Chief Carey shared that the fire department unions were volunteering to have their paramedics help with the process,” said Guseman.  “He shared that they wanted to start with the school districts that serve the City of Joliet.  We immediately jumped on board and offered West as a vaccination site.”

To get the clinic up and running, it was a team effort with many moving parts.  With the Joliet Fire Department leading the way, the collaboration included Will County Executive Dr. Jennifer Bertino-Tarrant, Amita St. Joseph Medical Center, Joliet Township High School, and numerous volunteer nurses and firefighters who dedicated over 13,000 hours of service.  The efforts resulted in the administration of over 60,000 vaccines and because of Blaskey and Carey’s leadership, additional mass vaccination sites were created and everyone who wants a vaccine now has access to it.

“Access to the vaccine in a swift fashion at the beginning of February lessened the anxiety and allowed things to start moving in a good direction,” said Dr. Guseman.  “Staff and kids began coming back to school, and sports and activities resumed in-person.  As both a superintendent and a mother of an 8th grader and a senior, I cannot thank Chief Blaskey and Deputy Chief Carey enough for their leadership and shared responsibility in helping our community in solving our COVID-19 vaccination problem.  In fact, when the Joliet West Clinic opened slots for anyone 12 and older, I am proud to say that I brought my 13-year-old daughter through.  Chief Blaskey, Deputy Chief Carey, and the entire Joliet Fire Department, who volunteered their time for almost three months, have demonstrated the shared responsibility of community leadership.”

The Superintendent’s medallion was established in 2006 and is presented by the Joliet Township High School Superintendent on behalf of the Board of Education.  It is given to individuals or groups that have distinguished themselves as going above and beyond in service and supports of our students, staff and district 204 stakeholders.