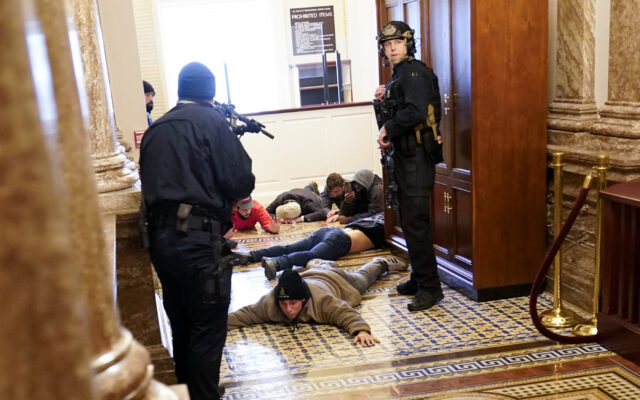 U.S. Capitol Police hold protesters at gun-point near the House Chamber inside the U.S. Capitol on Wednesday, Jan. 6, 2021, in Washington. (AP Photo/Andrew Harnik)

“I don’t make a statement like this lightly: Two weeks is too long for Donald Trump to remain in office, where he can continue to incite more untold violence.

“I say this after careful thought and reflection on my responsibilities as an American and as Governor of Illinois. We are in the middle of a deadly pandemic that continues to need the full time and attention of our state resources. We are working to oversee a massive vaccination effort that will require the full focus of our state agencies and first responders.

“Because of today’s events incited by the President, I had to ask the Illinois State Police and other law enforcement resources, engaged in important life-saving missions, to redeploy to heighten their presence at government buildings and the Capitol in Springfield.

“As the heart of our democracy was under siege and blood was literally being spilled in our most sacred halls, Donald Trump was praising the attackers. There are real questions about what efforts the President made to protect our Congress or what obstructions he committed that has prevented the ending of the siege.

“There is no doubt in my mind that his efforts to encourage a coup represent high treason to this democracy, our Constitution and all Americans. He poses a danger to our nation. He must be impeached and removed from office immediately. And every person in a position of public trust, elected or otherwise, who enabled the systematic dismantling of our democratic norms and failed to speak up or take action bears some responsibility for the culmination of four years of spreading bile.

“This violence is the natural conclusion of Donald Trump’s efforts to unleash the forces of hate and divide our nation. It must end.”