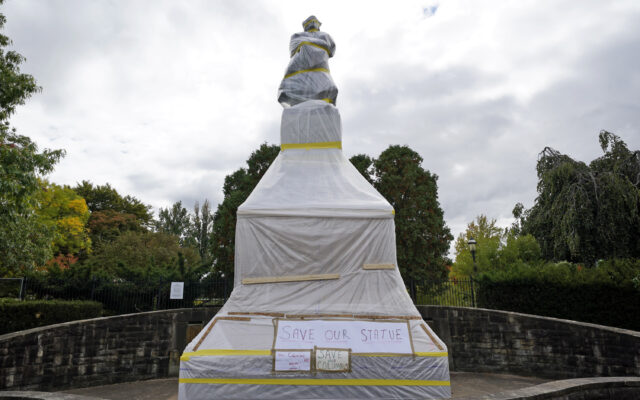 This is a statue of Christopher Columbus in the Oakland neighborhood of Pittsburgh that was wrapped to protect it from vandalism, Monday, Oct. 12, 2020. Pittsburgh city crews covered the statue in advance of Columbus Day following a recommendation from Mayor Bill Peduto that it be removed from a city park and placed in a private location yet to be determined. Mayor Bill Peduto said Friday that he agreed with the recommendation of a city art commission last month that the statue in Schenley Park should be removed. Peduto said the work "can be better displayed in a private location that places Columbus, his memory and his history in different context." (AP Photo/Gene J. Puskar)

Mayor Lightfoot disagrees with her special commission’s recommendations to take down problematic monuments in Chicago. The mayor said she will set up a group to study the issue further. The commission found that 13 civic monuments should be permanently removed, including the city’s three statues of Christopher Columbus. Those statues were taken down during the civil unrest that followed the May 2020 killing of George Floyd.