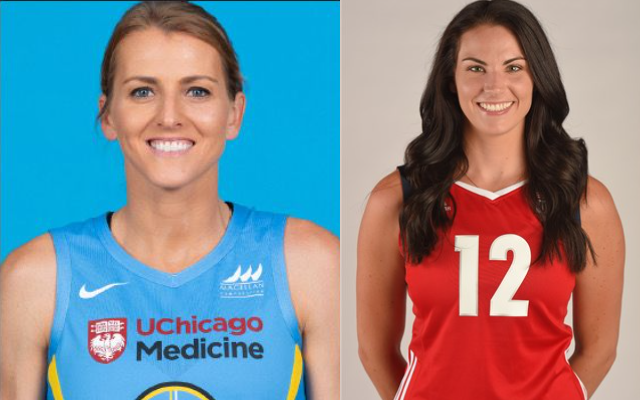 The 2022 Hilltopper/Angel Banquet featuring Olympic Bronze medalist Kelly Murphy ’08 and WNBA Champion Allie Quigley ’04 and sponsored by Busey Bank is scheduled for Thursday, February 3rd in the JCA gym.  Current San Diego Padres color commentator Mark Grant ’81 will serve once again as master of ceremonies, ensuring laughs and a great time. Tickets are $50 per person and includes dinner. Cocktails and dinner begin at 5:30 p.m. with the program to follow at 7 p.m. A cash bar and raffle prizes will also be available during the night.

Kelly Murphy ’08 was a three-time All-America selection at JCA, leading the Angels to two state trophies in her four years and capped off her senior season in 2007 being named the Gatorade National High School Player of the Year. During her collegiate career at Florida, she was a third-team All-American as a freshman, second team as a sophomore and first team each of her last two seasons. At Florida she became the first-ever four-time AVCA All-American in program history, was the 2010 SEC Player of the Year, and the Under Armour/Volleyball Magazine National Freshman of the Year in 2008. She has played in numerous international competitions with Team USA, highlighted by winning a bronze medal with Team USA at the 2016 Olympics in Rio de Janeiro. She has also played professional volleyball in Japan, and recently captured the inaugural FIVB Volleyball Nations League title with the U.S. women’s national team. Without a doubt one of the greatest female athletes to ever come out of JCA, Murphy is one of JCA’s two Olympians (along with Dave Sims) and the only JCA graduate to earn an Olympic medal.

Allie Quigley , a 2004 JCA graduate, is in the midst of a 13-year professional basketball career, highlighted by this past fall’s 2021 WNBA Championship for her hometown Chicago Sky. Over her professional career she has been named a WNBA All-Star three times, WNBA Sixth Woman of the Year two times, and has captured the WNBA Three-Point Competition Championships three times. Quigley is currently the leading scorer in Chicago Sky franchise history. Quigley has also embarked on a successful 14-year basketball career overseas, with stops in Russia, Italy, Turkey, Poland, and Hungary. Her 2021 Russian UMMC Ekaterinburg squad captured the FIBA Europe EuroLeague Women’s Championship, giving her two major professional league championships in one calendar year.

While at JCA, Quigley was a standout three-sport athlete, earning All-American status as an outside hitter in volleyball and as a guard in basketball. She was an All-Area shortstop in softball. She holds the school record with 515 kills as the Angels won the 2003 state title in volleyball. She also holds the school record for points scored in basketball with 2,387 for her career, as well as the single-game best of 49. She attended DePaul University, where she teamed with her little sister Samantha, leading the Blue Demons to four NCAA tournament appearances. She was named Honorable Mention All-American twice, and finished as the third-leading scorer in program history. Quigley was selected 22nd overall by the Seattle Storm in the 2008 WNBA Draft.

Mark Grant ’81, returns once again as this year’s Master of Ceremonies. He joins Murphy and Quigley as members of Joliet Catholic Academy’s esteemed Hall of Champions – Athletics.

Grant was selected 10th overall in the first round of the 1981 Major League Baseball Draft by the San Francisco Giants, only days after leading Joliet Catholic to the second of back-to-back state final appearances. He pitched eight years in the major leagues for San Diego, Atlanta, Colorado, Houston and Seattle. Since 1996, Grant has served as the San Diego Padres television color commentator.