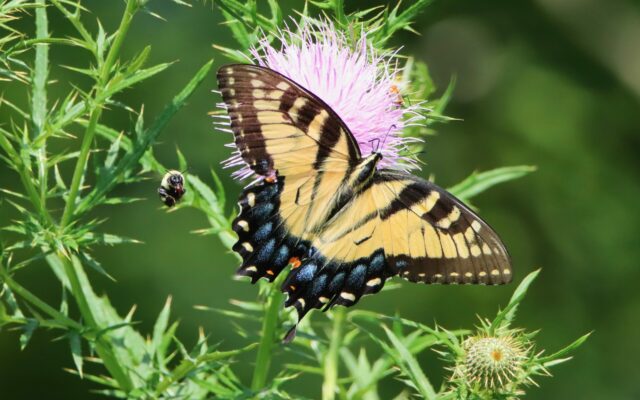 Crete resident Byron Morgan’s photo of an eastern swallowtail and a bee won August’s portion of the Forest Preserve District of Will County’s Preserve the Moment Photo Contest. The contest continues with monthly winners through December. (Photo courtesy of Byron Morgan)

If it floats like a butterfly and stings like a bee, it must be the winning photo for August’s portion of the Forest Preserve District of Will County’s Preserve the Moment Photo Contest.

Byron Morgan of Crete snapped the winning picture at Hickory Creek Preserve. The photo, which features an eastern tiger swallowtail on a flower and a bee in midair, received the most votes through public voting on Facebook after being chosen as one of five finalist photos by Forest Preserve judges. Comments on Facebook included: “This photo managed to pair these two wonders of the insect world! Just beautiful.” And also, “It’s like the bee is waiting for the butterfly! Gorgeous.”

Morgan is the fourth monthly winner since the contest began in May.

“I went to Hickory Creek because I always seem to get a good variety of wildlife and landscape pictures for my photography hobby,” Morgan said via email after being notified of his win. “This butterfly found a good resting spot, and I was able to get many pictures before the bee showed up. Thank goodness I was able to get them both together.”

The other finalist photos receiving honorable mentions in August were:

All photo contest entries can be viewed at Flickr.com/WillCoForests.