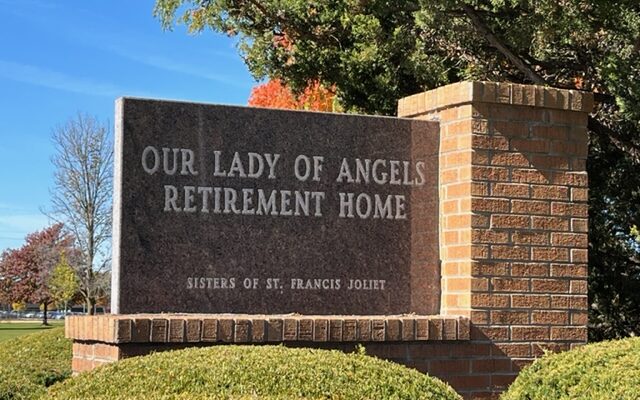 Our Lade of Angels Retirement Home Photo by: Evan Bredeson

As first reported on WJOL, the future of Our Lady of Angels in Joliet is unclear and could close as early as January first 2023. Sister Jeanne Bessette, president, Sisters of St. Francis of Mary Immaculate, and chair of the Board for Our Lady of Angels Retirement Home, sent a press release:

Regarding the story first reported on WJOL radio this morning about Our Lady of Angels Retirement Home’s closing, this was apparently made public by a caller to the morning news program who is a former employee of OLA. Unfortunately, it is true that we are considering closing, but we have not yet made a final decision and therefore have not developed any timeline related to closing. In fact we are meeting with the Illinois Nurses Association on Thursday to discuss the issue. Should we decide to close this 60 year old long-term care facility, we will not do so until well after January 1, 2023, so that we can do our best to ensure a smooth transition for our residents, their families and our staff.

Media reports regarding our ratings are incorrect; OLA continues to be a four-star rated facility.

While WJOL will not reveal its sources we would like to point out that it was not a former employee of OLA that tipped us off to the possible closing, but two people independent of one another.

Sources tell WJOL that staff did not know of the closing, but the sisters who currently reside at OLA were told about a week ago. There are currently 89 residents at OLA of which about 30 are Franciscan nuns. The Sisters have already been given choices of where they might end up.

Sources tell WJOL that a vote by nurses and other employees at OLA in August to unionize did not factor in the decision.

Since OLA opened to in 1962 it became the gold standard for rehabilitation and long term care and independent living within the Joliet community. But the building at Wyoming has fallen into disrepair over the years. Problems with elevators not working or broken dishwashers. An outside management team has been running the day-to-day operations and when food service wasn’t available, they had to order in breakfast from McDonald’s. Residents are eating off of paper plates and it’s been hard to keep staff.

The building would need a huge makeover.