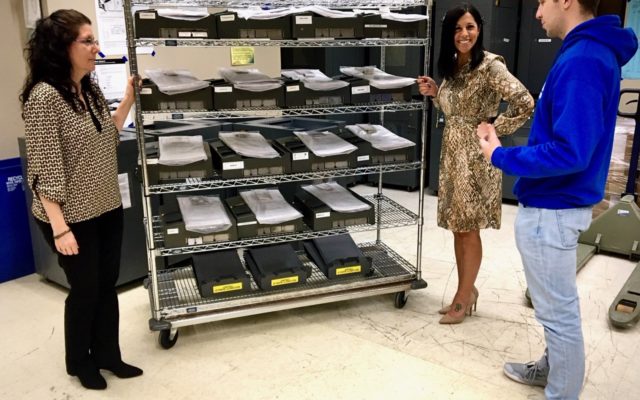 Will County Clerk Lauren Staley Ferry is joined by Elections Supervisor Brandon Swiderski and Election Analyst Christine Lopez Randall in reviewing preparations for the Public Test of Election Day voting tabulators. The Public Test is scheduled for 9 a.m., Monday, March 2 in the Will County Boardroom at 302 N. Chicago St., in downtown Joliet.

Will County Clerk Lauren Staley Ferry announces that a Public Test of the voting tabulators to be used on Election Day will be held at 9 a.m. on Monday, March 2 at the Will County Office Building, 302 N. Chicago St., in downtown Joliet.

Staff from the Will County Clerk’s Office will conduct the Public Test in the County Board Room on the second floor.

Representatives of the political parties, the press, and members of the public are invited to attend. Representatives from the Will County State’s Attorney’s Office also will be present.

“The Public Test is an opportunity to demonstrate that our voting equipment is functioning with accuracy as we head into the March 17 General Primary Election,” Staley Ferry said.  “It’s important that we have independent parties in attendance to inspect the outcome of this test so the public can have absolute confidence in the voting results.”

In the weeks prior to the Public Test, the County Clerk’s election team conducted internal Logic and Accuracy (L&A) tests on tabulators. The tapes from this L&A testing will be compared against the precinct tapes that are run during the Public Test.

The Public Test is required by Section 10 ILCS 5/24B-9 of the Illinois Election Code.