Say No To NorthPoint Informational Meeting In Joliet Draws Crowd 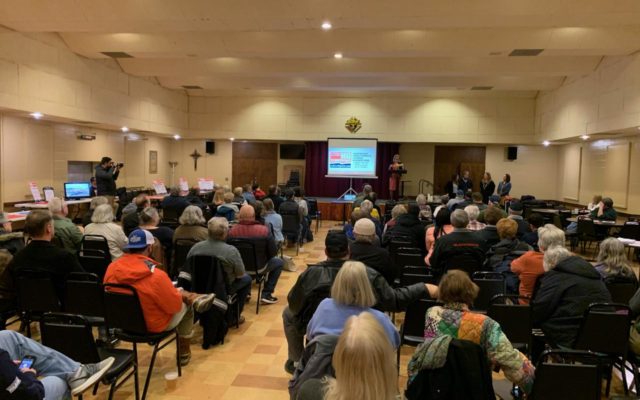 Just over 100 people in Joliet showed up for the informational meeting Thursday night regarding the NorthPoint proposal in Joliet at the Knights of Columbus on Infantry Drive. The Say To NorthPoint group facilitated the meeting to inform residents of the many issues with the project that have yet to be worked out. Specifically, the bridge over Route 53. This bridge which has been touted by NorthPoint as a panacea. The closed looped bridge is said to alleviate semi-truck traffic in the area of the Compass Business Park proposed 1/2 mile south of Breen Road and East of Chicago Road. But Say No to NorthPoint group says the bridge cannot legally be built as proposed due to land ownership issues. The closed loop will not be closed all the time but will be open at times during the course of the day.

NorthPoint first approached Elwood in 2015 to build their Compass Business Park. Elwood rejected the plan and NorthPoint has been trying to find a foothold in Will County ever since.

Last week the Joliet Plan Commission voted unanimously to recommend approval for the Compass Business Park. On March 17th the Joliet City Council will vote to annex 12-hundred acres. NorthPoint has asked the city of Joliet to annex 1,260 acres of land 1/2 mile south of Breen Road and East of Chicago Road for the development of the Compass Business Park.

On Monday, March 9th another informational meeting hosted by Say No to NorthPoint group at Croatia Hall, doors open at 6 p.m. with a presentation at 7 p.m.