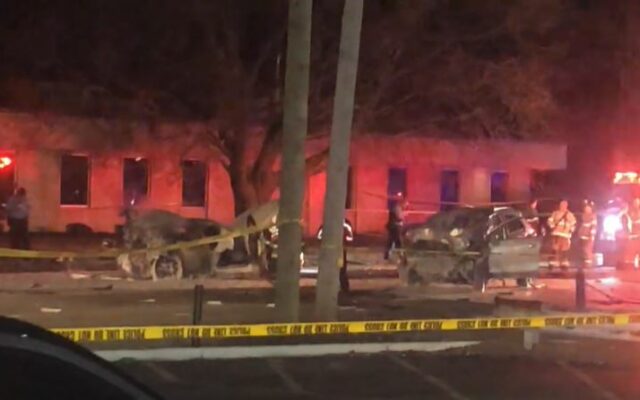 A crash in Joliet on Tuesday night left two cars completely destroyed. At 8:16 PM, Officers responded to Glenwood Avenue and Springfield Avenue for a traffic crash with injuries. A crossover sport utility vehicle driven 46-year-old female from Joliet was traveling westbound Glenwood Avenue at a high rate of speed in the inside lane. As this vehicle approached the intersection of Springfield Avenue, it struck the rear of a sedan , which had been stopped at a red traffic light at Glenwood Avenue and Springfield Avenue. The crash caused the sedan to be forced into a tree on the north side of the intersection and it became fully engulfed in flames. Officers immediately attempted to provide aid, but unfortunately, the driver of the sedan was pronounced deceased at the scene. The deceased driver has yet to be identified. The female driver of the sport utility vehicle was transported to Amita St Joseph Medical Center with serious injuries and was later transferred to Loyola University Medical Center. This crash remains under investigation by the Joliet Police Department Traffic Unit.