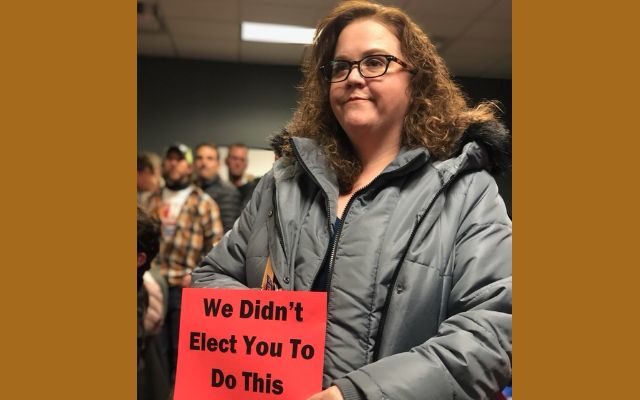 It was a raucous Village Board meeting Tuesday night, as word gets out that Manhattan is on board with annexing 700 acres to NorthPoint for their compass business park. Well over 100 people packed the Village Board meeting. A vocal opponent to NorthPoint, Erin Gallagher asked Manhattan Mayor Jamie Doyle if he had a deal with NorthPoint to annex 700 acres. Mayor Doyle answered, “I’m not answering the question” to which the crowd groaned and disapproved.

Manhattan has been informed by City of Joliet that Joliet will annex 13-hundred acres to NorthPoint. Thus the 700 acres that butts up against the 13-hundred acres is expected to be taken by NorthPoint. Gallagher called out Mayor Doyle saying he’s not consistent with his public and private message.

After the public speaking portion, Mayor Doyle said he’s going to move forward with NorthPoint claiming he has no choice. The boundary agreement with Joliet expires in 2026 and Joliet will just take the land. He was asked why doesn’t he just wait until then, but didn’t have an answer.