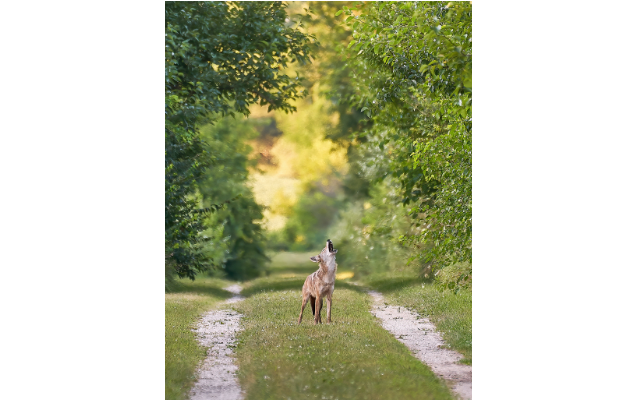 A coyote releasing an emotion-filled howl on the Henslow Trail; a brave wolf spider carrying 100 of her babies on her back, stunning barred owls and more photos highlight life at Midewin National Tallgrass Prairie in the “Woodsy Owl & Friends” 50th Birthday Photo Challenge. Carl Pixel won the photo challenge with his photo of a howling coyote on the Henslow Trail.

“When I first saw this photograph, it just filled me with a lot of joy,” said USDA Forest Service Eastern Region Forester Gina Owens. “There is so much action and heart in the picture. What a great job and a stunning photograph.”

“A very special milestone in natural resources history has brought us together here tonight,” said Midewin Prairie Supervisor Wade Spang. “Fifty years ago, today, on September 15, 1971, Woodsy Owl said for the first time: ‘Give a hoot, don’t pollute.’ Throughout the years, Woodsy Owl has shared more messages that continue to inspire and keep us motivated to be good stewards. ‘Lend a hand, care for the land’ are Woodsy Owl’s words of wisdom that are as important as ever here, where over 275 different species of native Illinois prairie plants are involved in the prairie restoration process.”

“I am very excited. I did not expect to win,” Pixel said. “When I took the photo of the coyote, it was in August, at around 7:30 p.m. I was already leaving when I heard commotion about 100 yards away from me on the trail. He just started howling. It was a little dark, so I was keeping my distance. As quickly as I could, I pulled out my camera and knelt on the ground and took three or four photos.”

Pixel’s photo faced a tie at first with the wolf spider photo, which was taken by William Shea at the River Road Seedbeds at Midewin National Tallgrass Prairie.

“It was a ‘right place at the right time’ kind of thing.” Shea said. “I just happened to come upon the wolf spider. I’ve seen wolf spiders carry their babies before, but not that many at a time, so that was a special treat!”

In this golden anniversary year for Woodsy Owl, a special category in the photo challenge was dedicated to owls. Several photos featured barred owls and short-eared owls.

Monika Bobek’s photo of a barred owl was determined as the finalist in the Owls category.

“I’m very grateful for this award!” Bobek said. “Owls are my whole life. I discovered Midewin National Tallgrass Prairie two years ago, and I really spend a lot of time there. I can hike hours and hours. I found a family of barred owls accidentally on a very gloomy winter day, and since then we have really spent a lot of time together. They helped me to handle a very difficult time in my life, I really believe in connection between human and owl. They are always there; if I don’t see them, I hear them. Last spring, I was even honored to see their owlet; it was really a touching and priceless experience.”

Here is the full list of overall winning photo and finalists in each category:

Sunrises and Sunsets: Henslow Bridge at Sunrise by Barbara Parisi

Photos by Kids: Blue Lobelia and Lilly Pads on A Pond (tied) by Grace and Olivia Thompson

Photos that were entered into the contest will be featured in the 2022 Midewin National Tallgrass Prairie Conservation Education Guide. The howling coyote photo will be featured on the cover.