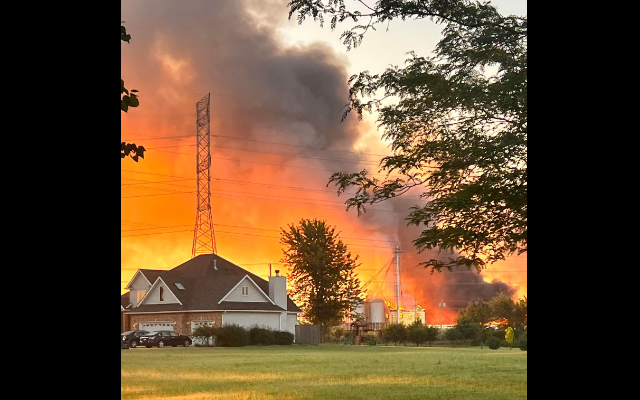 Troy Fire Protection District responded to a fire at Tri-County Stockdale, a farm equipment store, after a 911 call was received at 4:30 a.m. Tuesday, July 19.

Four of the six buildings at Tri-County Stockdale, 25520 West Black Road in Shorewood, were destroyed by the fire. The buildings stored fertilizer, pesticides, seed, feed, and other agricultural products that produced a toxic smoke when they burned.

A shelter-in-place order was put in place around 7 a.m. for a 2-mile radius northeast of the fire because of the smoke. The order was lifted around 8 a.m., but residents with respirator issues should call 911 if they experience breathing difficulties.

The fire is under control at this time and fire personnel will remain on scene monitoring the situation throughout the night.

No one was injured and no one was at the business when the fire began. Chickens and two exotic birds that were in the building were rescued by emergency personnel.

Troy Fire was assisted by 15 fire departments and around 60 firefighters. Water tenders, or tankers, were called to the scene to provide more water than the fire hydrant could provide.

The structures that burned are considered pole buildings and heavy equipment is being brought to the site to lift the metal pieces off the remaining hot spots.

Black Road, between County Line and River Road, remains closed at this time as water continues to be shuttled to the site. Avoid the area.

Air quality will continue to be monitored throughout the next few days.

Fire investigators from the State Fire Marshal’s Office are also on the scene but may not be able to enter into the buildings for some time to determine the cause of the fire.