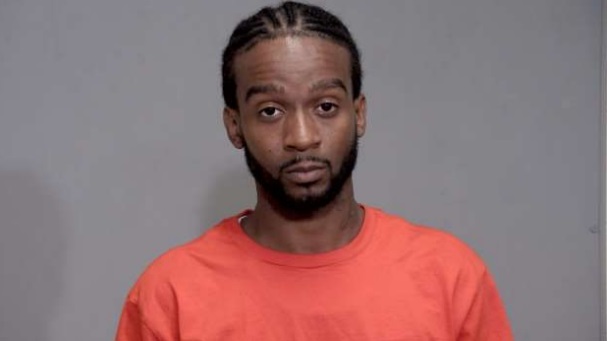 Joliet Police arrested a 34-year-old Bolingbrook man on Sunday morning on charges of Aggravated Unlawful Use of a Weapon, Unlawful Possession of a Firearm by Felon, and Unlawful Possession of Ammunition. It was 6:46 am that police were called to Auto Zone, located at 875 Larkin Ave) for a report of a stolen vehicle. Shortly after arriving, Police were met by Kevin Champion, who had told officers that his Dodge Challenger might have been stolen. During a search of the area, officers located the vehicle in a dry retention pond situated behind the automotive store. In addition, officers noticed tire marks from the car in a nearby parking lot that led into the grass.

Police say that Champion indicated he was operating the vehicle before leaving it in the grass overnight. A tow truck was called to the scene to remove the car from the retention pond. While the vehicle was being towed, an officer observed a handgun on the passenger floorboard. Officers recovered the loaded 9mm handgun, and Champion was placed into custody without incident.