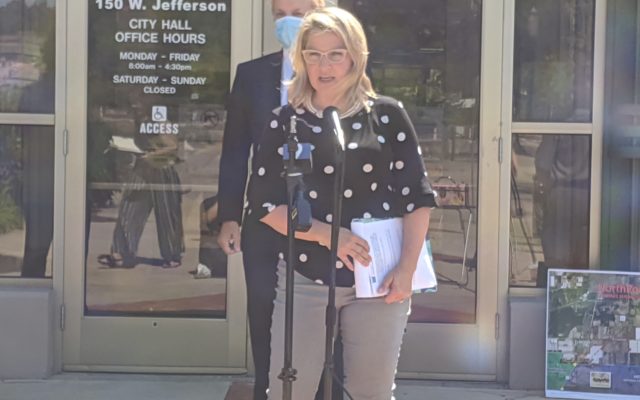 Information concerning thousands of robo-texts offering personal cell phone number and residence of Erin Gallagher, who is the volunteer spokesperson for Stop NorthPoint LLC, (but is not a public official), are being turned over to local and federal authorities, according to Stop NorthPoint attorney Robert Fioretti.

Despite the robo-text message urging recipients to harass Mrs. Gallagher, the effort resulted instead with an overwhelming number of strangers and friends showing support to her and the Stop NorthPoint movement, many telling her to “keep up the good work.”

“People know that Mrs. Gallagher has been a force for good in the community, not only with the Stop NorthPoint lawsuit, but also helping numerous food pantries and Covid relief,” Firoretti said. “These personal attacks on her and her family are not only false, they demonstrate the lengths certain people will go to.”

On Friday, thousands of robo-texts we sent to Joliet registered voters as well as union members outside Will County encouraging recipients to call Mrs. Gallagher’s private cell to tell her to keep her “anti-union agenda out of Joliet.”

“I want to personally thank all the friends and strangers who reached out to support me when my family and I were under attack by malicious forces who need to lie and cheat to get ahead,” Gallagher said. “We are all safe, and the outpour of love well-overshadowed some of the vile messages that are being investigated.”

Mrs. Gallagher is a Joliet native and Joliet Central Steelman, whose father credits his union after he was drafted and served in the U.S. Army during the Vietnam War that returned him to his proper job and pay.

Stop NorthPoint is a grassroots organization that organized to file a lawsuit against Northpoint Development and City of Joliet in an effort to create a permanent halt to NorthPoint’s proposed warehousing development five times the size of Midway Airport. The proposed development is positioned across the street from Abraham Lincoln National Cemetery and Midewin National Tallgrass Prairie along Historic Route 66.