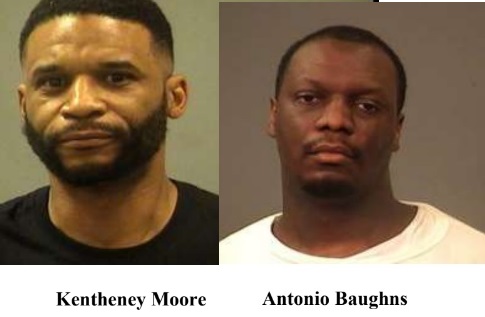 Two Chicago men have been arrested after allegedly breaking into a popular Joliet restaurant. Joliet Police were called to Metro Bar and Grill, 2019 Essington Road, on Wednesday morning at 3:22 am for a possible burglary in process. Shortly after arriving policed noticed that someone had forced entry inside of the bar by damaging the front door. Officers set up a perimeter and saw two men, Antonio Baughns and Kentheney Moore, inside and near the slot machines. They attempted to flee from officers but both were quickly taken into custody without further incident. During a search Officers found multiple slot machines that had been pried open, a damaged cash register, and an ATM that the subjects had attempted to break into. Also recovered were multiple tools used in the burglary.