Veterans, Native Americans and neighbors are joining forces to Stop NorthPoint and ask for the FAA to opposes annexation in an effort to protect Abraham Lincoln National Cemetery from NorthPoint Development’s trucking warehouses. The group says the impact of tens of thousands of trucks, will result in smog and noise on the solemn cemetery.

A press conference will be held at the Stone City VFW on Wednesday, August 26th at 11 a.m. at the Southwest corner of Route 53 and Laraway Road in Joliet.

Numerous veterans groups and others are sending a joint letter to the FAA requesting that the agency follow its legal obligation of the Section 106 process to determine if any of the 14 notable historical sites within Jackson Township, (including the national cemetery and five other historic veteran cemeteries and a Native American archeological site) are worthy of National Historic Act protection.

The National Historic Act requires all federal agencies to consider the impact on historic sites, such as ALNC, before taking any actions, decisions or undertakings. Each agency is required to appoint a preservation officer. The review process is referred to as the Section 106 process, because it is set forth in Section 106 of the Act. 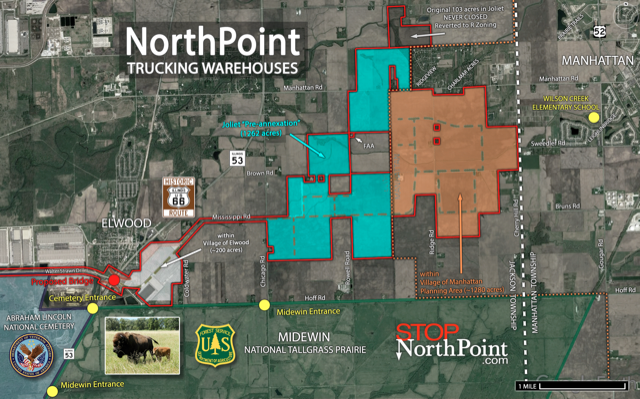 The 1.44 acres of federal FAA land is critical to the NorthPoint project. Without it being annexed into Joliet, the majority of NorthPoint’s land does not have the necessary contiguity, (land located in succession). By allowing the FAA land to annex into Joliet, the FAA is allowing the desecration of our cemetery and other historic sites, due to semi trucks already getting lost via GPS in the cemetery, and rolling over graves. NorthPoint’s proposed bridge will be adjacent to the cemetery, causing loud trucking traffic and smog.

On June 10, 2020, the Federal Aviation Administration decided to issue a letter of no contest followed by a letter June 25, 2020 that clarified no contest, no support concerning annexing property into Joliet that is owned by the United States of America (at 22513 Rowell Avenue, in unincorporated Jackson Township, Will County) for the exclusive benefit of the private enterprise, NorthPoint Development. The decision to remain neutral and the action of sending that letter are in effect undertakings that trigger a Section 106 review process.